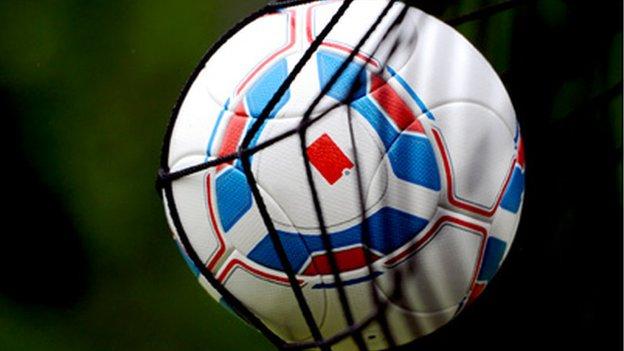 The home side were dominant even before Shrewsbury's Nat Knight-Percival's dismissal on 80 minutes for a heavy challenge, his second bookable offence.

Swiss Under-20 international Jayson Leutwiler made several vital saves for Shrewsbury, while Jake Howells hit the post in only the second minute.

Luton's point moves them up to fourth place, two points behind the visitors.

After Wright-Percival's red card, Luton piled on the pressure in the closing stages and Leutwiler had to touch a Mark Ellis deflection round the post.

Substitute Shaun Whalley almost grabbed a dramatic late winner for Luton but was denied by an excellent near-post save from Leutwiler, who also made a double save to block Scott Griffiths's half volley and then Andy Drury's curling effort from 20 yards.

The closest the visitors came to breaking the deadlock was when James Collins' cross forced keeper Mark Tyler to scamper to his back post and prevent the ball dipping under the bar.

"It was a really hard-fought point, especially going down to 10 men, but it was a dogged, determined performance and I was really pleased with the way my boys dug in.

"Connor Goldson and Mark Ellis were immense at the back, as was the goalkeeper - and special praise for Cameron Gayle to step back in and give a performance like that.

"Up front we never worked their keeper too much, but on the other side - did they really work us? No."