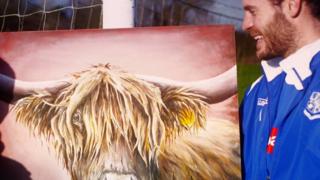 Tranmere Rovers goalkeeper Owain Fon Williams reveals his hidden artistic talent as he prepares to face Swansea City in the FA Cup third round on Saturday.

League Two's Tranmere were rewarded with a home tie against Premier League side Swansea after beating Oxford United 2-1 in a second round replay.

Williams, who paints in his spare time, says his team are looking to upset the odds and that "anything can happen" in the FA Cup.

You can hear more from Tranmere Rovers during Football Focus on BBC One on Saturday at 1210 GMT.