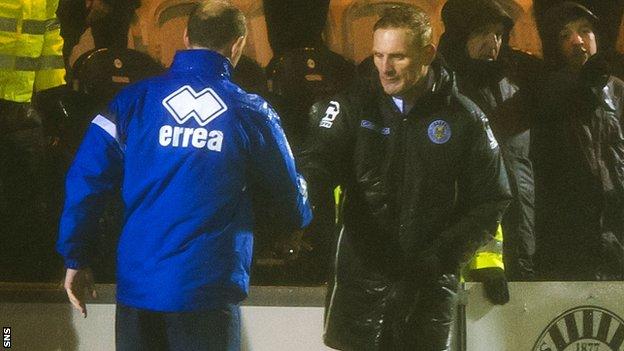 In the wind and rain in Paisley, neither side created anything of note in the first half.

But when Marc McAusland was judged to have fouled Lee Miller in the box after the break, Alexei Eremenko netted from the spot to give Killie the lead.

St Mirren's Kenny McLean was then sent off for reacting to a foul on one of his team-mates before Craig Slater scored Killie's second from the spot, after Stephen Mallan tripped Josh Magennis.

Slater was then sent off by referee Willie Collum, having picked up a second yellow card for his celebration, before St Mirren pulled one back from the spot, Gregg Wylde netting after Jim Goodwin was brought down by Manuel Pascali.

"I was much more pleased with the performance we put in second half but at the end of the day the decisions from the officials cost us," Teale told BBC Scotland.

"Having looked back on them, I'm extremely disappointed. The first two for Kilmarnock, for me they're not penalties, and for our one, does he try to even it up a bit by giving a penalty for us?

"I don't think that's a penalty either. It's obviously late in the game and maybe he's thinking he needs to do something to make it right. I was actually embarrassed that he gave us the penalty because I don't think it merited it.

"At the time I thought it was very soft [McLean red card], I didn't think there was anything in it, but he's made that decision and it's cost us again because it's not just this game, we now lose Kenny for two games.

"It's something I'll look at because I think there's a chance for us to make an appeal there.

"We probably deserved to get a draw because I don't think Kilmarnock did anything, and our performance didn't merit anything more than a point. I don't think any team deserved to win the game, it was a poor game and it's decisions that have ultimately given Kilmarnock the victory."

Killie manager Allan Johnston was delighted to pick up a second Premiership victory in succession.

"It's a great win for us at an important time of year," he told BBC Scotland. "This was always going to be a hard place to come with them getting the win last week, so it was important we won.

"It was very difficult [conditions] but if one team was going to win the game it was going to be us, I don't think they put us under any pressure.

"January is going to be a massive month for us and it's important that we build on this result again. We have a few injuries at the moment but the young lads who have come in have done fantastically well."