When Kenny Dalglish concluded his playing career in 1990, Liverpool's fans were almost unanimous in their view that this was the greatest player they had seen, and were possibly ever likely to see, in the red shirt.

The most accurate measure of the sheer scale of Steven Gerrard's contribution to Liverpool Football Club - which will come to a close when he leaves Anfield at the end of the season - is that he has made so many of those same fans think again.

It will be an argument conducted against two different backdrops, with Dalglish's brilliance performed in a Liverpool side that conquered all domestically and in Europe, while Gerrard was often left almost alone to shoulder the heavy burden of teams struggling to make their mark.

What is beyond dispute is that the debate will contain golden memories of some of the greatest moments in Liverpool's history.

They will range from Dalglish winning three European Cups and his involvement in eight title triumphs as player and manager, on through the years to Gerrard inspiring the famous comeback from 3-0 down at half-time to win the Champions League on penalties against AC Milan in Istanbul in 2005, to his match-defining display with two goals before another triumph on penalties against West Ham United in the FA Cup final in Cardiff 12 months later.

Gerrard may not have won trophies on the scale of other Liverpool players, but he still played his part in great successes, so often at times when the club were in reduced circumstances compared to the glory years.

In the post-war years, Liverpool fans had the great Billy Liddell to warm them before the Bill Shankly era gave them greats such as Roger Hunt and Ian St John. The 70s and the next decade gave them the likes of Kevin Keegan, Dalglish, Graeme Souness, Alan Hansen, Ian Rush and others.

For Liverpool fans, the years since the Merseyside-born midfielder made his debut on 29 November 1998 as a last-minute substitute for Vegard Heggem in a Premier League game against Blackburn Rovers will be known as the era of Steven Gerrard.

In that time, he is the only player to score in a Uefa Cup final, when Liverpool beat Alaves in Dortmund in 2001, a League Cup final, when they won 2-0 against Manchester United in Cardiff in 2003, an FA Cup final and a Champions League decider. All were Liverpool triumphs - and all with decisive Gerrard contributions.

Even on the day when news of his impending departure emerged, and at a time when the onset of age and manager Brendan Rodgers's understandable desire to occasionally leave him out pushes him to the margins, he still scored both Liverpool goals from the penalty spot in the 2-2 draw with Leicester City at his beloved Anfield.

As he prepares to officially confirm his date of departure, his current tally is 180 goals and 695 appearances, collecting 11 trophies along the way. It has all been achieved while at times carrying sub-standard Liverpool teams almost single-handedly.

One of his greatest nights was when he scored the late thunderbolt against Olympiakos at Anfield in December 2004 that gave Rafael Benitez's side the 3-1 victory required to take them out of the group stage en route to eventual, unlikely victory in Istanbul.

Gerrard has had great players around him such as Michael Owen, Fernando Torres and Luis Suarez - all beneficiaries of his ability to fashion goals as well as score them - but often he has more or less carried the burden of inspiration and expectation alone.

Other Liverpool players may have secured more trophies than Gerrard but his greatness was often forged out of adversity, produced at the moments of greatest necessity. When Liverpool have had Gerrard, their fans have had hope - and so many times he delivered for them.

While no-one should ever doubt his genius for one second, Dalglish was nearly always surrounded by world-class quality in most areas of the pitch. This luxury has rarely been afforded to Gerrard.

Even in one of their darkest moments this season, when Liverpool made a desperately disappointing exit at the group stage after their return to the Champions League, the last faint hope of qualification only came in the final minutes against FC Basel after Gerrard produced a trademark brilliant free-kick, the sort he has scored on countless occasions.

Gerrard will also be held in special affection at Liverpool because of his loyalty, almost unswerving for his entire career despite temptations to join Chelsea in 2004 and 2005, which included a hastily withdrawn transfer request just weeks after Istanbul.

After asking to go, Gerrard realised hours later he simply could not leave and - despite interest from elsewhere over the years - has never been tempted again. Until now of course, as he has finally decided to call time on his Liverpool career, ahead of a likely move to the United States.

Barring developments from the realms of fantasy, Gerrard will now leave Anfield with the one space on his personal roll of honour permanently unfulfilled - namely a Premier League title.

And he must leave with the pain of constant reminders from opposition fans about his ill-fated slip against Chelsea last April that allowed Demba Ba to run clear and score in front of the Kop in a 2-0 defeat that took that elusive medal away from Gerrard when he almost had it in his grasp.

It will rank alongside his most bitter disappointments, but when Liverpool fans look back on his career it will barely register as a footnote because they know Gerrard has been at the heart of all the triumphs they have enjoyed during his career. No serious Liverpool fan will ever hold that moment against him.

Despite a disappointing follow-up to that thrilling campaign last season, with Liverpool currently down in eighth, 17 points off the leaders, Gerrard still has the opportunity to add to his trophy collection.

Liverpool face his old adversaries and admirers Chelsea in the Capital One Cup semi-finals, the FA Cup is still to come and of course there is the Europa League, not the competition he would have wished to be contesting but one he would still love to win.

Whether Dalglish, Gerrard or others can be ranked as the greatest to represent the club is an argument Liverpool fans can, and probably will, have for years to come - and will be able to relive great times while doing so.

Different players, different eras, different teams. The argument may never have a winner - does it actually need one? - but what elations they have all given to Liverpool fans.

It is simply an illustration of just how good Steven Gerrard has been, and the indelible mark he has made on Liverpool's history, that he has truly earned his right to be in such stellar company and part of that conversation. 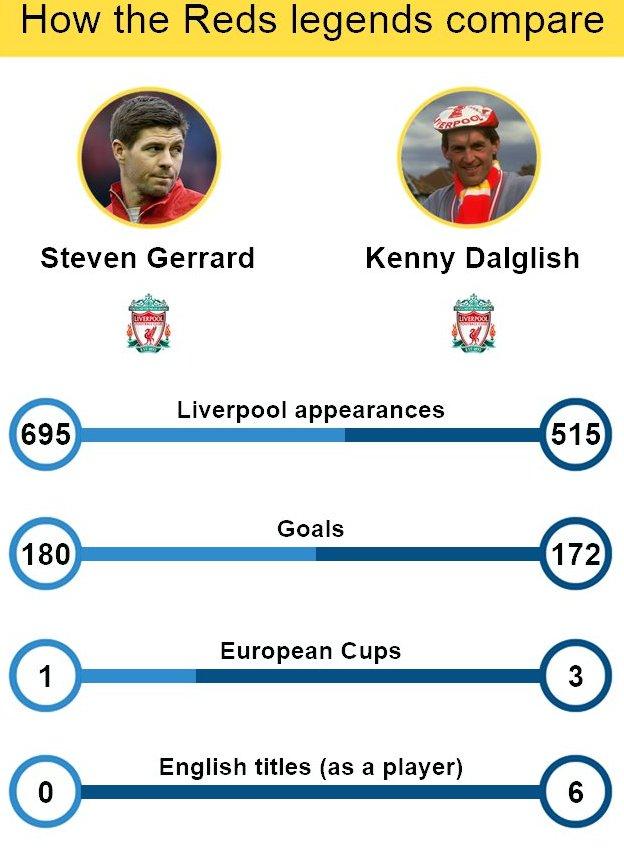