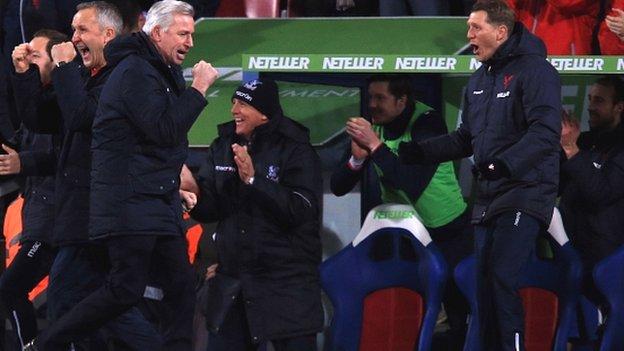 Alan Pardew's first Premier League game in charge of Crystal Palace ended in a thrilling victory as they came from behind to beat London rivals Tottenham.

A superb low strike from Harry Kane, the striker's 18th goal of the season, gave the visitors the lead.

And Jason Puncheon grabbed a late winner with a low left-footed strike.

Puncheon's goal added to an already frenzied atmosphere as the sound of renewed optimism, justified as the hosts displayed endeavour and fight under new management, rang around Selhurst Park.

In the build-up to his first game in charge at Selhurst Park, Pardew said having the backing of 99% of the stadium was a "great feeling" and the former Palace player, not accustomed to such admiration from the stands during his four years in charge of Newcastle, punched the air and saluted the crowd as the ground erupted at full-time.

For the Crystal Palace faithful, it was their time to also enjoy an unfamiliar feeling, that of victory - their first win in nine league games which lifted them out of the bottom three to 15th.

Tottenham, who had the majority of possession, were unable to replicate the form which earned them a spectacular 5-3 victory over Chelsea in their last Premier League outing and the defeat is a setback to Mauricio Pochettino's hopes of a third-place finish.

The north Londoners were the more creative and assured of the two teams until Palace levelled to spark a dogged fightback, which ended Spurs' seven-match unbeaten run in all competitions.

Christian Eriksen lacked composure, half-volleying wide from six yards in the first half, but fortunately for the visitors, in Kane they have a striker who possesses coolness in abundance in front of goal.

The Englishman shuffled for space near the edge of the box and confidently struck into the bottom left corner for his sixth league goal in as many games.

Palace, playing on the counter-attack, lacked such ruthlessness, with James McArthur heading over the crossbar from close range and Murray wasting a fine chance when put through by McArthur before the break.

But the south Londoners were positive after falling behind, with their best chance falling to Gayle, whose stabbed effort was aimed straight at goalkeeper Hugo Lloris, before the forward made amends from the spot.

Buoyed, and with vociferous support on their side, Palace played the latter stages with confidence, and a weaving run by Wilfried Zaha ended with Puncheon's winner.

Tottenham had a penalty appeal turned down for a Ledley challenge on Kane, before the full-time whistle sparked jubilant scenes.

Tottenham manager Mauricio Pochettino said: "I don't want to speak about the referee. I think it is a very difficult job, but it is true the penalty decision changed the atmosphere.

"Maybe after we suffered a little bit, Crystal Palace believed they can come to get the three points.

"A lot of long balls came in and I think that in this challenge they wanted it more than us. We are disappointed with the result and we lost a good opportunity to stay with the top four."