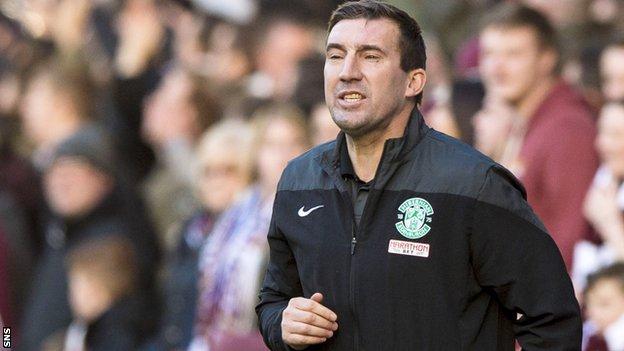 Manager Alan Stubbs hailed his Hibernian side after seeing them draw 1-1 at Championship leaders Hearts in the Edinburgh derby.

Jason Cummings edged the visitors ahead but a wonderful Jamie Walker goal secured a point for the hosts.

Hibs boss Stubbs said: "I am disappointed because I thought we were outstanding. We've come to Tynecastle and really showed a performance of dominance. We showed a lot of courage to get on the ball and play on the front foot and take the game to Hearts.

"I felt we should have been in the lead [at half-time] but credit where it's due, it was a fantastic strike [by Walker]. When you're not playing as well as what we were, when you've got that in your armoury it's a great tool to have. Unfortunately we have been on the end of two great goals against them that have got them back into games.

"But there are so many positives from our point of view, the lads deserve so much credit, they're a completely different bunch to what were there when I came in.

"We took the game to Hearts, we thought we were going to ask questions of them and we certainly did.

"We weren't afraid of coming here today and that's not arrogance, it's the confidence that's flowing within the group.

"The hurdles I keep putting in front of the players, the problems I keep giving them, they keep coming up with the answers and that's what I want them to keep doing. I want them to keep raising the bar, I want to take the club to a level they're going to be proud of, and I want to keep bringing in players that are going to improve us, and I've been given a lot of support to do that.

"On our day we're as good as anyone and I think today showed that."

Hearts head coach Robbie Neilson said: "It was a good game. Hibs probably had the better of the first half-an-hour of and then we got ourselves back into it.

"For us to pick up a point and take that unbeaten [league] run to 19 games is fantastic for the players and for the fans.

"There was a lot of things we worked on during the week that I didn't think we implemented in the game at all really. There were periods when we did do it and we got a bit of joy, but I thought we were a bit off at the start and it took us time to get going. Once we got the goal and the fans got behind us it was a different game.

"There's a belief that we'll score goals and will keep teams out as well. In the last 10 minutes there were a lot of chances, balls getting knocked into the box by Hibs, but our two centre-halves and full-backs were magnificent. The amount of tackles and blocks were fantastic for us and it's guys like that who will win us the league. Yes, strikers score the goals, but defenders are the ones who keep the clean sheets to win games.

"There's a lot of young, motivated guys who want to do well for the club, and when you get that combined with the facilities we've got and the fan-base, it's got us going in the right direction.

"We won't be in touching distance [of the league title] until it's mathematically impossible for anyone to catch us."