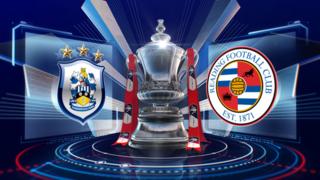 Nick Blackman's goal gives Reading a narrow win over their Championship counterparts Huddersfield in a low quality tie in the FA Cup third round.

After a scrappy first half James Vaughan spurned the game's best chance, heading over at the back post from Jack Robinson's cross from the left byeline.

Blackman finished low into the corner after Hal Robson-Kanu's pass with the game's only shot on target.