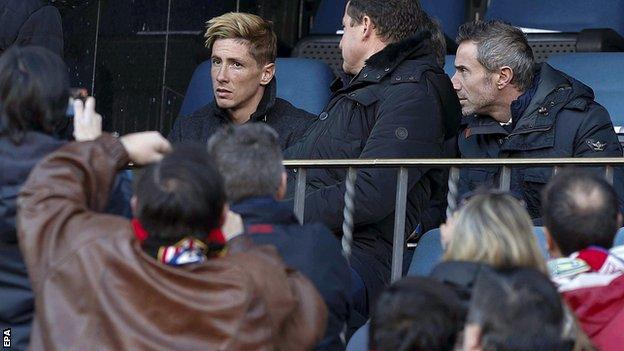 Fernando Torres watched from the stands as Spanish champions Atletico Madrid maintained their pursuit of Real Madrid and Barcelona by beating Levante.

The Spain striker, 30, was not eligible as his move from AC Milan cannot be formally completed until the Italian transfer window opens on Monday.

France forward Antoine Griezmann headed in either side of the break, but Nabil El Zhar's deflection gave Levante hope.

Uruguay defender Diego Godin eased any worries with another header late on.

The Spanish league season resumed after a two-week winter break as Atletico hosted lowly Levante at the Vicente Calderon.

Victory moves Diego Simeone's side within a point of leaders Real and level with second-placed Barca, although they have played more games than their title rivals.

"We should have finished off the game in the first half but we did not pressurise enough," said centre-back Godin. "My goal calmed us down as we had become nervous after conceding.

"It was important for us to finish the year winning and also start with another victory."

Elsewhere, Nicolas Pareja scored the only goal of the game as Sevilla claimed a 1-0 win over Celta Vigo and climbed into fourth spot above Villarreal, who were held to a 2-2 draw by bottom side Elche.

Ivan Cavaleiro netted the winner for struggling Deportivo La Coruna as they edged a 1-0 victory over mid-table Athletic Bilbao, while Tomer Hemed's brace gave 10-man Almeria a surprise 2-1 win away at Malaga.