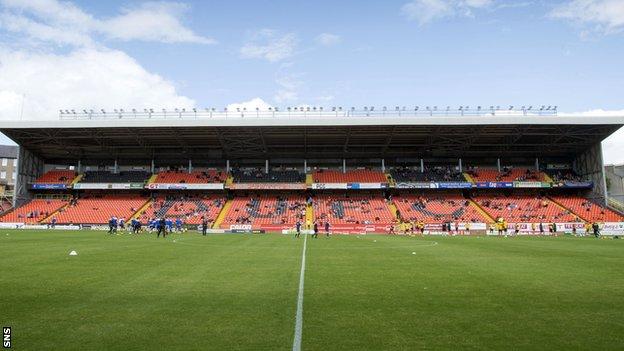 Dundee United have signed Arbroath striker Simon Murray on a two-and-half-year contract for a fee of about £50,000 including add-ons.

He has scored 18 goals for the League Two club this season and would have been out of contract this summer.

The 22-year-old will train full time with United but has been loaned back to Arbroath for the rest of the season.

Murray, who joined the Red Lichties from junior side Tayport last summer, scored against Montrose on Saturday.

McNamara told the United website: "We have been keeping an eye on Simon. A number of clubs were interested in signing him and I am pleased he has chosen to join Dundee United.

"He has pace and composure and his goal record this season shows he knows where the goal is. He will join us immediately to benefit from full time training but will go out on loan to Arbroath for the remainder of the season."

Murray said Tannadice was "an excellent place to evolve as a player".

"Dundee United is a club which gives players the opportunity to perform and when I heard they were interested in me I was excited and wanted to come here," he continued.

"With the benefit of full-time training I will look forward to coming back here in the summer ready to stake my claim for a starting place in the first team. Right now, I can focus on continuing to score goals and continue to be educated at Arbroath."

It is understood Murray was also watched by Aberdeen, Dundee and Hearts this season.