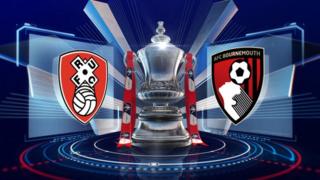 Championship leaders Bournemouth come from a goal down to thrash Rotherham 5-1 and move into the FA Cup fourth round.

Richard Brindley's deflected effort put the hosts ahead but Shaun MacDonald pulled the Cherries level with a calm finish just before the interval.

Dan Gosling then fed Junior Stanislas who rounded the keeper and tapped in.

Ryan Fraser made it 3-1 after good work from Yann Kermorgant who then hit two in four minutes, meeting Stanislas's centre and then slotting in a fifth.