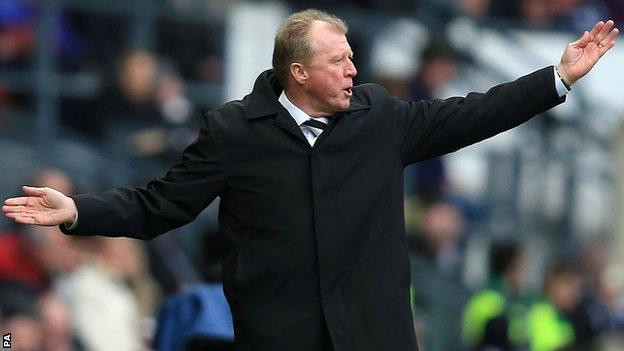 Former England manager McClaren, 53, has been linked with the vacant job at Premier League side Newcastle United.

"There is no question whatsoever of him leaving," said Rush.

"He is one of the highest-performing managers in English football, so he is going to be linked and admired by others. But we have had no approaches."

Rush added: "I'm aware that there is speculation about Steve at the moment but he has completely dismissed it. His future is with us."

McClaren, who has also managed Middlesbrough, FC Twente, Wolfsburg and Nottingham Forest, took over at Pride Park in September 2013.

He led the Rams to defeat in the Championship play-off final last season, and they are currently third in the table following back-to-back wins over Birmingham City and Leeds United.

Newcastle are looking for a new boss after Alan Pardew left for top-flight rivals Crystal Palace.

But McClaren continues to insist he will not be Pardew's replacement, despite still being among the bookmakers' favourites to take over.

"I've dismissed that link and I'm sticking to that," said the Yorkshireman after Derby's hard-fought FA Cup win against Conference side Southport.

"We've a job to do here, it's a great club and we're challenging at the top of the Championship, aiming to get into the Premier League."