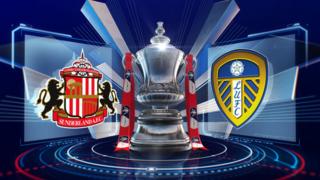 Patrick van Aanholt marked his return from injury with the winning goal as Sunderland beat Leeds 1-0 in the FA Cup third round at the Stadium of Light.

The Dutch defender, 24, drilled a low left-foot shot past Leeds goalkeeper Marco Silvestri from the edge of the penalty area for the game's only goal.

Leeds captain Liam Cooper saw a header hit the post in second-half injury time as Leeds were denied an equaliser.