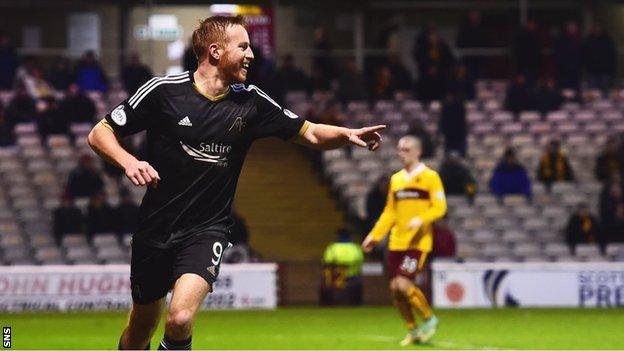 Aberdeen manager Derek McInnes says his players can be proud of the way they negotiated a tough festive schedule.

Adam Rooney's brace gave the Dons which moves them four points clear of Celtic at the top of the Scottish Premiership.

"The Christmas and New Year schedule challenges your professionalism and your focus," McInnes said.

"I think on both accounts the players have been spot on and they get their rewards for that."

Aberdeen produced a dominant display at Fir Park, and could have put the match to bed long before Rooney added his second from the penalty spot in the 89th minute.

After seven straight league wins since the end of November, McInnes is delighted with the way his players have come through a notoriously difficult period of the season.

"We're so pleased with what the players are giving us at the minute," the former St Johnstone boss commented.

"We said prior to December what an important month it was going to be, playing teams in and around us.

"It wasn't a complete performance today but it was a dominant performance from us. The one thing we're looking for is to get that second goal just a little bit earlier.

"The second goal comes late on as it did against St Johnstone, but there is a confidence about us that we're going to get the job done. To have so many clean sheets certainly brings that confidence to the team."

Much discussion in recent weeks has centred on whether Aberdeen can mount a serious challenge to Celtic for the Premiership title, but McInnes is focused purely on keeping his side's winning run going.

"The approach is only to go and win the next game," he said.

"We always feel we can win every game we play. Obviously you're not going to, but what we have got is that consistency. We've got that ingredient of confidence at the moment for the players. There's momentum as a club.

"I think today and over the festive period with the run that we're on we can feel proud of ourselves."

Motherwell manager Ian Baraclough felt there were positives for his side to take despite the defeat.

"Luke Watt came in to make his debut, 17-year-old, no fear, and dealt with it very well," Baraclough said.

"Dom Thomas and Lee Erwin coming off the bench gave us that spark and that second wind to take the game to them.

"It was in that period that you think "something's coming", 15 or 20 minutes sustained where we pegged them back and gave everybody a bit of self-belief. That's what's going to happen with young players getting their chance."

Baraclough saw a big improvement in his team from the derby hammering at the hands of Hamilton on New Year's Day.

"I've always said I can accept losing games of football, but there's a way of losing and today was possibly an acceptable way of losing a game of football by giving it a go, by not letting Aberdeen have an easy way of it.

"They've had to earn their 2-0 victory, and it was in contrast to the Hamilton game."

The former Sligo Rovers manager confirmed his side would appeal against Stephen McManus's red card for handling on the line, which resulted in the penalty which Rooney scored to make it 2-0.

"When the ball's been hit with that velocity he can't get out the way of it," said the Fir Park boss.

"He turns his body and it hits him on the top of the arm below the shoulder. It's a bit of a travesty if he does miss a game through getting sent off there so we'll be appealing that."