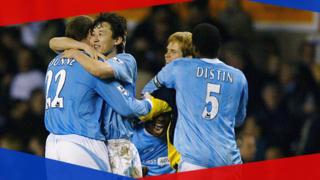 Archive: Man City win from 3-0 down

Manchester City produce an incredible comeback in a 2004 fourth round replay to beat Tottenham 4-3 at White Hart Lane with 10 men having trailed 3-0 at half-time.

Ledley King, Robbie Keane and Christian Ziege scored Spurs' goals before City's Joey Barton was sent off as the players left the field at the interval.

Sylvain Distin and Paul Bosvelt gave the away side hope before Shaun Wright-Phillips levelled and then Jonathan Macken headed a late, late winner.