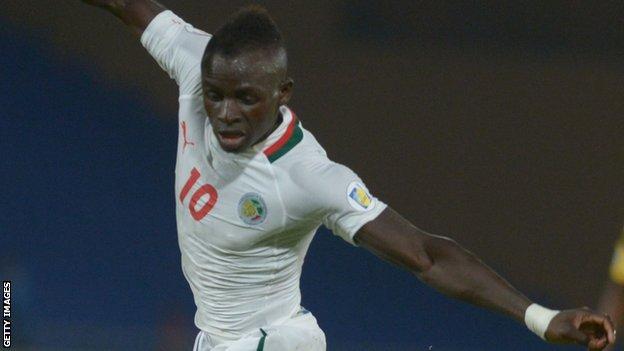 Senegal will assess injured pair Sadio Mane and Diafra Sakho at their Africa Cup of Nations camp to determine if they can participate at the finals.

Southampton midfielder Mane has a calf problem that his club boss Ronald Koeman says has ruled the player out of the 17 January to 8 February event.

Sakho, who plays for West Ham, is suffering with a back injury.

Senegal boss Alain Giresse said both players will join up with the national squad in Morocco for further tests.

Giresse has until 7 January to finalise his squad but revealed he may use a "medical joker" - a provision that allows him to call up a player up to 48 hours before the country's first game (against Ghana on 19 January) - in order to give Mane the greatest chance of recovering in time.

"The desire to get our players fit for the tournament is there. Sadio is a special player given his qualities. We will do everything to make him operational as soon as possible."

In Sakho's case, Giresse said the striker "faces a recurring problem" and the Frenchman added that the player will have tests with the national team's medical staff.

Sakho's club manager, Sam Allardyce, revealed the player has seen a specialist about the problem but more information is needed.

"He has had all the appropriate scans, but we need to sit down and assess the extent of the injury - has it got any worse since the last time? Is it the same (problem)?" he said.

"With a back problem, it is a delicate scenario, so until we get the full diagnosis from the specialist, we won't know which will be the way forward."