Adebayo Akinfenwa captured the nation's attention on Monday night when he scored an unlikely equaliser against Liverpool in the FA Cup third round. 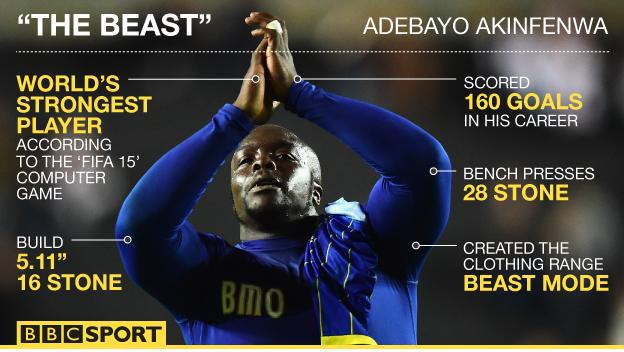 But who is the man they call "The Beast"? Here are 10 things you may not know about the 32-year-old AFC Wimbledon striker.

Akinfenwa is 5ft 11in but he weighs in at a mighty 16 stone, or 102kg. That's a BMI of 31.3 or around the same body weight as England rugby hooker Tom Youngs.

He says he has always been a "naturally big guy", and has even struggled to get football teams to take him seriously.

"People said I'm too big to play football," he said. "One hundred goals later, I'm not. There are no limitations to what you want to do."

He can bench-press 180kg 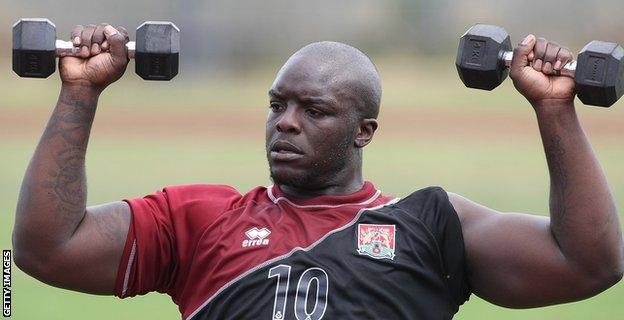 Or 396 pounds, if you prefer. That's three times the body-weight of his team-mate, midfielder Sammy Moore.

Such is his passion for lifting heavy weights, he admits that previous managers have had to "rein him in" to stop him spending too long in the gym.

Akinfenwa's strength has been recognised by the Fifa series of video games, which have deemed him the strongest footballer in the world, with a strength rating of 97 out of 100.

He suffered racism in Lithuania

Akinfenwa's first professional club was FK Atlantas in Lithuania - but his time in the Baltic was not a happy one.

He received racist chants from home supporters. "Coming from London, where nobody would disrespect me, this was just brazen," he said.

Many players would have packed their bags, but Akinfenwa was resolute. "There ain't nobody going to run me out of nowhere," he said.

He may have almost scuppered their FA Cup campaign, but Akinfenwa is a big fan of Liverpool.

He says his idol as a child was John Barnes, and the lifelong Reds supporter was determined to come away from the FA Cup tie against his heroes with a memento.

"I want Steven Gerrard's shirt," he said before the match. "I've told the boys that if anyone gets his shirt before me we are going to have a problem." Unsurprisingly, he got the shirt.

Akinfenwa's brawny physique has earned him the nickname 'The Beast', but to the hulking frontman, it's more than just an epithet.

"Beast Mode On is a state of mind," he explained. "Beast Mode is about applying yourself and defying the limitations people put on you."

He gets mistaken for NFL players

Akinfenwa is often recognised as a footballer. Just not always as the right sort of footballer.

The striker admits he was once pulled over by a policeman who mistook him for a player in America's NFL.

Akinfenwa was happy to set the errant copper straight, telling him: "I play proper football."

He's been likened to a fat Eddie Murphy

Rival fans, perhaps emboldened by the presence of security personnel between the crowd and the pitch, are fond of jocularly abusing Akinfenwa from the terraces.

The big man just laughs it off, though.

"My favourite chant is 'you're just a fat Eddie Murphy'. When I heard that I could not stop laughing. I would prefer a 'muscular Eddie Murphy'." Sorry Adebayo, I don't think it's going to catch on.

During Monday night's FA Cup match, there were a whopping 39,000 tweets related to Akinfenwa.

Akinfenwa was born to a Muslim father and a Christian mother.

"When Ramadan was on dad made us fast and then I had to read the Bible every day and go to church," he said.

It was his mother's faith that he was drawn to and he now reads the Bible daily and attends church every Sunday.

He's never been at a club longer than 30 months

Akinfenwa is something of a journeyman.

Despite his impressive goalscoring record at lower-league level (91 goals in 251 league games), he has struggled to find a permanent home.

He has had two spells at Northampton Town, but has also played at Doncaster Rovers, Torquay United, Swansea City, Millwall and Gillingham in a nomadic career.