Football fans will travel far and wide to support their beloved team. Others do not have to go to so much effort.

Meet Ben Swift, the Bristol City supporter who has been able to watch the League One club for free all season - from the roof of his garden shed.

The Eastend Shedman, as he's now commonly known, has found the best - and cheapest - seat in the house thanks to the redevelopment of City's Ashton Gate stadium.

Swift, a sales manager by day, has been a City fan since the 1980s and attends the majority of the home games - in a proper seat.

But when the old steel East Stand was demolished during the summer - the first stage of the multi-million pound stadium refit - and with the help of a step ladder and a foot-up on the neighbours' fence, Swift has been able to watch the Robins in clear view.

And since his first venture onto the roof in August, when City lost in the Capital One Cup to Oxford, he has gathered a cult following from fellow supporters in the stands.

"It was when they were first demolishing it and I thought: 'If that's going to down to ground zero, I'm going to get a good view of this,'" he told BBC Sport.

"I realised from July that I could do it and I thought it might be fun to watch a few games from the bottom of my garden.

"My first game was at night and I think people noticed me because the light was reflecting off my beer can," he joked. "A small group of people spotted me and it's built from there."

He started to make himself at home on the roof and made his vantage point more prominent with a cardboard sign - naming it 'the Shed End' - and he signed up to Twitter to post pictures of his antics on social media.

"My favourite memory was when the crowd first sang 'Shedman, Shedman - sing us a song'," said Swift.

"And a couple of weeks ago, they were singing for Steve Cotterill [manager] to give them a wave and he sort of flapped his arms about to encourage them to sing a bit more.

"Then they did the same to me, so I did exactly the same as Steve - I turned my back on the crowd and waved my hands like him. It's little things like that which make it funny.

"The volume of noise you hear is incredible. You can hear each individual stand. I guess if you're sat in the stands, the noise just cancels out from the other stands. But being by yourself you get the full volume from every single direction."

Swift's enjoyment has been enhanced by Bristol City's form this season. Cotterill's men have spent five months at the top of the league and have 11 home wins from 15 games.

But, alas, all good things must come to an end, and Saturday's match against Notts County is likely to be the last for Shedman, who has been giving money to charity while he's not had to pay for a ticket.

As the stadium development continues, his view will soon be blocked by the new stand being erected.

But because of the following he's gained, and the joy it seems to bring to everyone at Ashton Gate, Bristol City have given him a proper seat in the stadium for the rest of the season.

"In recognition of the international coverage he's gained and the imagination he has captured, we've offered him a seat inside the stadium for the rest of City's home league games which he was thrilled to accept."

His shed-climbing days will soon be over but Swift says he will always look back on his six months of unorthodox football with fondness.

"The club could have tried to stop me but they've been really positive. I feel a bit overwhelmed that they've given me a season ticket, they really didn't have to," he said.

"Before, the fans have had a distant relationship with the club but now, since the arrival of Steve Cotterill, it seems everyone is working together.

"I hope I've brought a bit of fun to everyone watching. And Shedman will continue in the stands." 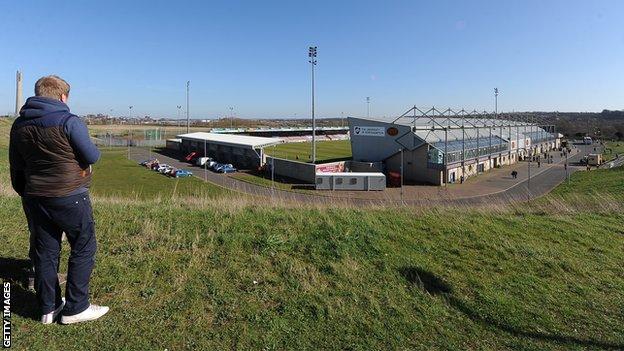