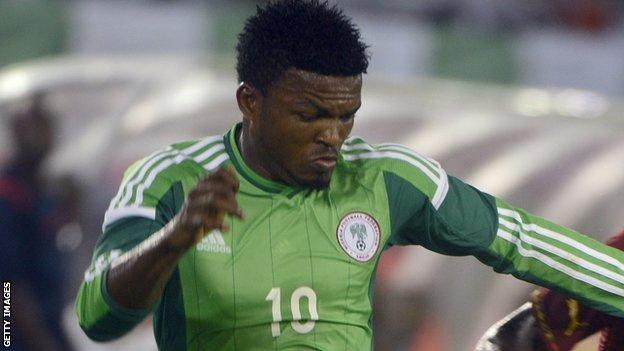 The 20-year-old, who is moving from Nigeria's Dolphins, originally signed a long-term contract with Sarpsborg only to sign a three-yard deal with Esperance barely a week later.

Eduok claims he was deceived into signing the Sarpsborg deal.

"I want to go to Esperance because that's the one thing I did right," Eduok told BBC Sport. "It is very simple, Dolphins and Esperance agreed a deal and I signed for the Tunisian club.

"I went to Norway, I signed the contract there but the agent did not get the clearance required from my present club Dolphins for me to talk or sign a contract."

Dolphins say they have ratified the striker's move to Tunisia but Sarpsborg sporting director Thomas Bernsten claims the player's transfer rights were owned by an academy and not the Nigerian side.

The row is likely to be referred to football's world governing body Fifa.

Eduok, the second top scorer in the 2014 Nigerian League season with 20 goals, wants everything resolved as soon as possible and insists he has not broken any rules.

"I am not scared of [a Fifa sanction] because I have not done anything illegal or wrong," added Eduok.

"I just want to resume my professional career with Esperance because I have the blessing of my club to go there."

Eduok has represented Nigeria at under-20 level and scored on his senior debut in a 1-0 friendly win over Ghana in November.

He produced a stunning performance for Dolphins in October by scoring all his side's goals in the 6-0 win over Nembe City in Port Harcourt in the Nigerian top tier.