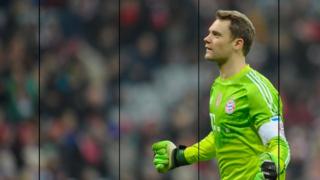 Ballon d'Or: The case for Neuer

Neuer won the World Cup with Germany in 2014, as well as a German league and cup double with Bayern Munich. He was also his country's player of the year and conceded just 40 goals in 62 games in 2014.

Cristiano Ronaldo successfully defended his world player of the year status convincingly in Zurich to claim the 2014 crown with 37.66% of all votes. Lionel Messi was second on 15.76%, narrowly ahead of Neuer, who had 15.72%