Manchester City boss Manuel Pellegrini admitted his side wasted a chance to keep pace with Premier League leaders Chelsea after a 1-1 draw at Everton.

City took the lead through Fernandinho but Everton quickly equalised through Steven Naismith as Roberto Martinez's side earned a deserved point.

"We really dominated the game in the first half," said Pellegrini, whose side are two points behind Chelsea.

"But if you get chances and don't take them then it is very difficult to win."

He added: "We had to make the difference in that first 45 minutes but we finished in the wrong way." 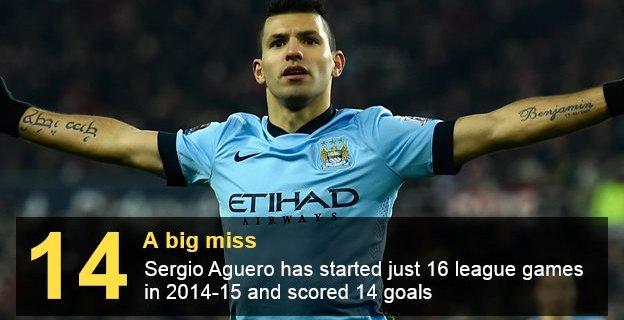 City were without Yaya Toure, who is on Africa Cup of Nations duty with Ivory Coast, although Sergio Aguero was fit to return as a substitute after five weeks out with a knee injury.

"I think every team will drop points from now on until the end of the season," said Pellegrini.

"We never think before the game it is going to be easy and Everton is a very difficult team at Goodison Park.

"Everton is a very difficult team at set pieces and had their chances to score. If the whole game was exactly like it was in the second half you would maybe say it was a good draw but I cannot forget the first half when we played really well but didn't finish well."

Aguero's appearance from the bench with a quarter of the game remaining will perhaps prove some consolation for Pellegrini as prior to suffering knee ligament damage in early December, the Argentine had scored 16 goals in 15 matches in all competitions.

Only Chelsea's Diego Costa - on 15 - can better Aguero's tally of 14 in the league this season and as City are also without the injured Edin Dzeko, Stevan Jovetic has been the only strike option available in recent weeks.

"It is important for the team," added Pellegrini on Aguero's return. "Sergio worked for just two or three days with the squad but now he has a full week to continue working.

"I hope he will return in a few days and perform how he did before he was injured."

Toffees boss Roberto Martinez was pleased Everton avoided the ignominy of losing five league games in a row for the first time in more than nine years - and was delighted with the performance of striker Romelu Lukaku, who tormented City's £30m defender Eliaquim Mangala.

Martinez said: "He is a player who needs to be at his best physically. He can't contribute fully just by being half-fit.

"When he came back from the World Cup he wasn't 100% but his desire made him want to contribute.

"He is someone who wants to take responsibility for our team and he now looks back to his very, very best physically."

Meanwhile, Martinez brushed off talk of unrest among his squad, adding: "You are going to get all sorts of stories, some of those you can't even imagine to believe - but that happens when you are in the middle of a bad run.

"The way to talk is on the pitch and we have seen in the last two games a really strong group of players."