Real Madrid forward Cristiano Ronaldo has won the Ballon d'Or world footballer of the year award for the second year in a row.

Wolfsburg and Germany midfielder Nadine Kessler was named women's player of the year, while Colombia's James Rodriguez won goal of the year.

Wolfsburg boss Ralf Kellermann was named women's football coach of the year after a successful defence of the Champions League.

The three candidates for the Ballon d'Or were all picked in the team of the year, along with defenders Philipp Lahm, David Luiz, Thiago Silva and Sergio Ramos, midfielders Andres Iniesta, Toni Kroos and Angel Di Maria and forward Arjen Robben.

Cristiano Ronaldo successfully defended his world player of the year status convincingly with 37.66% of all votes, winning for a third time. Barcelona and Argentina counterpart Lionel Messi - who won four years in a row until Ronaldo beat him last year, was second on 15.76%. He was narrowly ahead of Bayern Munich and Germany keeper Manuel Neuer, who had 15.72%.

Ronaldo, who scored 52 goals in 43 games during 2014, looked emotional when collecting the award from former France, Barcelona and Arsenal striker Thierry Henry.

The 29-year-old said: "I would like to thank all of those who voted for me, my president, my coach and Real Madrid. It has been an unforgettable year. To win this trophy at the end of it is something incredibly unique."

Women's World Player of the Year

Kessler said: "My heart is beating madly at the moment. I don't think I ever thought in my life I would achieve this moment.

"Without my team-mates and my coach, this would never have been possible. I have a great degree of gratitude that I must give to my family. They have seen me through all the difficult times."

Puskas Award (goal of the year)

Roche, who scored a stunner for Peamount against Wexford in the Irish top flight, had hoped to be the first female winner of the Puskas Award.

She landed 33% of the public vote to Rodriguez's 42%. Manchester United striker Robin van Persie - the third nominee - earned just 11% for his diving header against Spain in the World Cup.

Read more about the award and see the goals here.

The Fifa team of the year was voted for by 20,000 professional footballers worldwide. 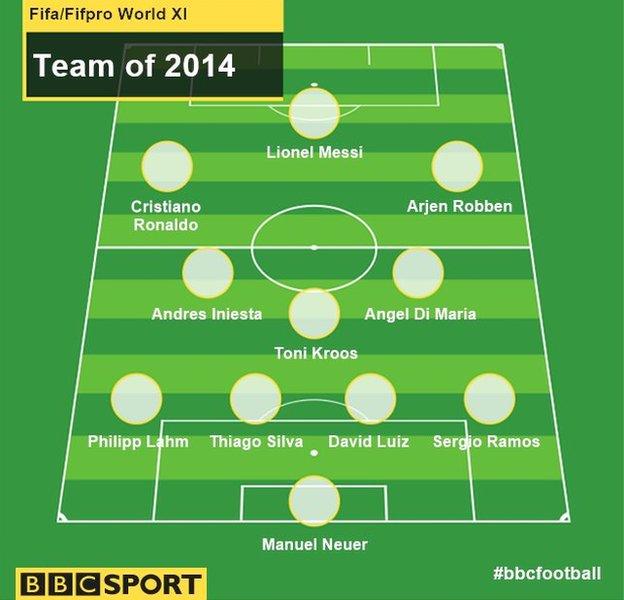 Germany boss Joachim Low, 54,won after leading his country to World Cup glory in Brazil, beating Argentina 1-0 in the final.

"It is a huge honour after what's been an incredibly successful year," he said. "It's the icing on the cake - the cake obviously being the World Cup. I'm just taking this award on behalf of everybody who has taken this team to where it is. I would like to thank all the German coaches who do so much good work with the young players. They are all coaches of the year."

Wolfsburg boss Ralf Kellermann, 46,was named women's football coach of the year after leading the German club to a successful defence of the Champions League.

He said: "This award is an outstanding moment. Unfortunately I've picked up an individual award for what is team sport, so I dedicate this to my whole team. I would also like to pay tribute to [Wolfsburg midfielder] Junior Malanda, who was so sadly taken from us two days ago."

The winner was the thousands of volunteers who gave up their time to work at Fifa competitions - including the World Cup - over the past 12 months.

The Presidential Award was picked by Fifa president Sepp Blatter for "a person that has made a superlative contribution to football without seeking to monopolise the limelight".

The winner was Japanese journalist Hiroshi Kagawa, who covered his 10th World Cup last summer at the age of 89.