Barcelona forward Lionel Messi admits "I don't know where I'll be next year" although says he wants to stay at the Catalan club.

The Argentina captain had dismissed speculation linking him with a move as "lies" at the weekend.

But the 27-year-old said "nobody knows what the future holds" at Monday's Ballon d'Or ceremony in Zurich.

He lost out to Real Madrid's Cristiano Ronaldo as world footballer of the year for the second year in a row.

Messi was asked if he envisaged ending his career at Barcelona, his only senior club, or at Argentina's Newell's Old Boys in his hometown of Rosario.

"I'm not sure what's going to happen, whether I'd go to Newell's," he said.

"I don't know where I'll be next year although I've always said I want to end my career at Barcelona."

It had been suggested La Liga's record goalscorer might leave the club following reports of a training-ground row with manager Luis Enrique, who took over last summer.

He has spent his entire career at the Nou Camp, winning three Champions Leagues and six La Liga titles as well as four world footballer of the year awards, since making his debut in 2004. He is contracted until 2019.

After scoring in Sunday's 3-1 victory over Atletico Madrid, Messi said: "I have no intentions of leaving for any team, not Chelsea nor Manchester City.

"I'm tired of all the things that people have been saying. I didn't ask the club to fire anyone."

Finance expert Rob Wilson of Sheffield Hallam University told BBC Sport that Manchester United and Real Madrid are the only clubs that could afford to buy Messi outright and satisfy Financial Fair Play. 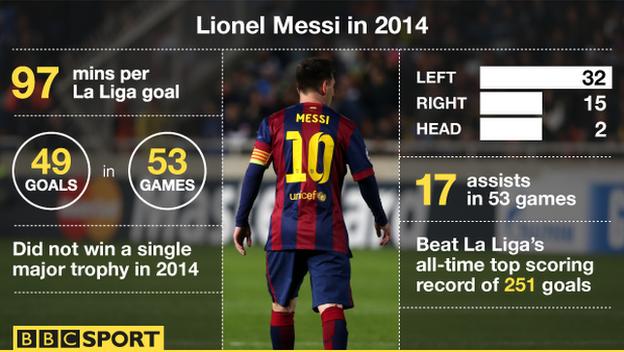