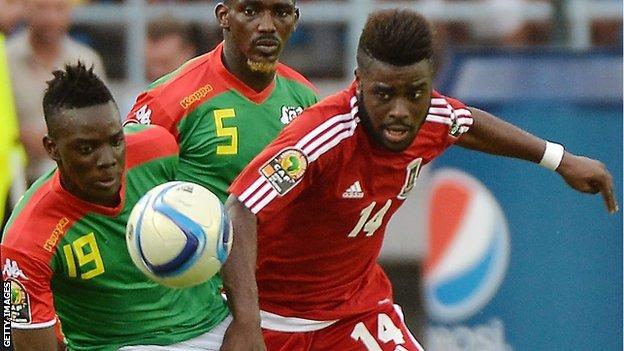 Burkina Faso were twice denied by the woodwork as they were held by Equatorial Guinea in the first goalless draw of the 2015 Africa Cup of Nations.

Alain Traore curled a free-kick against the post on 19 minutes, and 20 minutes later his volley was tipped on to the same upright by keeper Didier Ovono.

The Burkinabe also came close after the break when Jonathan Pitroipa should have converted a far-post cross.

Doualla missed Equatorial's clearest scoring chance when he blazed over.

Having suffered a surprise defeat to Gabon in their opening match, 2013 runners-up Burkina Faso were eager to produce a better display against the tournament hosts in their second Group A game.

And the Stallions carved out the best chances throughout, but a combination of bad luck and woeful finishing has left their tournament fate out of their hands.

Equatorial Guinea might consider themselves fortunate to have collected their second draw from two games, although they had opportunities of their own to have taken all three points.

That said, the Burkinabe should have built a healthy lead in the opening half.

Although Alain Traore was unfortunate to see two good efforts come back off the woodwork, he also wasted two other good chances with inaccurate finishing.

His brother Bertrand showed similar waywardness in front of goal as Equatorial Guinea somehow escaped with their goal intact.

The hosts also rode their luck when Jonathan Pitroipa's superb run was cynically stopped by Diosdado Mbele, who was shown a yellow card that could easily have been red as he appeared to be the last man in defence.

Seven minutes into the second half Pitroipa contrived to miss the ball when a touch at the post would have broken the deadlock and shortly after Bertrand Traore volleyed over.

With a draw a poor result for the Burkinabe they pushed forward and it began to leave space at the back.

Equatorial Guinea almost exploited it when Javier Balboa played in Doualla but his wild finish was entirely in keeping with the game thus far.

Kike's selfishness, shooting high when his team-mates were well-placed, robbed Equatorial of another chance to snatch the lead.

Burkina's final opportunity fell to Alain Traore but the forward could not find the target, leaving his side without a goal in two games and their tournament hopes having by a thread.

As for Equatorial Guinea, they need to beat Gabon on Sunday in their final group match to ensure their place in the quarter-finals.

"We had chances, but the same problem, finishing. Unfortunately, we cannot score and that's the problem."