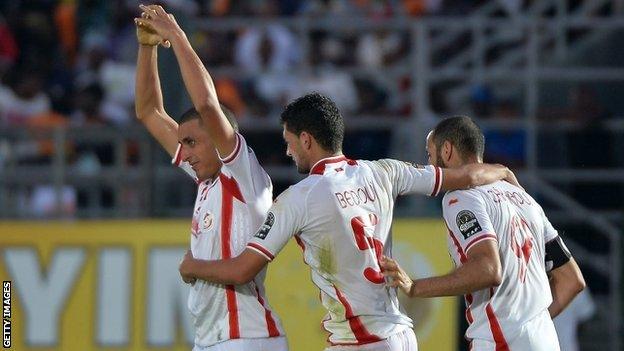 Tunisia made the most of Zambia's wastefulness in front of goal as they came from behind to win.

Emmanuel Mayuka opened the scoring when he blasted home a cross from the impressive Rainford Kalaba.

But Mayuka was injured when stretching for a chance to turn the ball into an empty net and moments later Tunisia scored against 10 men when Ahmed Akaichi scored from two yards out.

Tunisia improved after that and Yasine Chikhaoui headed home a late winner.

The Eagles of Carthage are now on four points after two games, with Zambia on one point with one game left in Group B of the Africa Cup of Nations.

Zambia have not won a match since lifting the trophy in 2012 - drawing four before this defeat, which was their first in 13 Cup of Nations games.

They could have had the game won before half-time with Kalaba firing just wide from 25 yards, forcing a save from Aymen Mathlouthi and then snatching at a chance.

Tunisia rarely threatened to score although they should have had a penalty when Emmanuel Mbola kicked over Youssef Msakni in the box after 57 minutes.

Moments later Mayuka was inches away from doubling the lead when he tried to turn a cross in from two yards. However, he injured himself in the process and that was the turning point.

While he was off the pitch receiving treatment, Akaichi touched in a Mohamed Ali Moncer corner from close range.

Mayuka left the stadium in an ambulance and with that Tunisia gained the momentum. With two minutes left the turnaround was complete as Youssef Msakni's cross was headed in from close range by Chikhaoui,