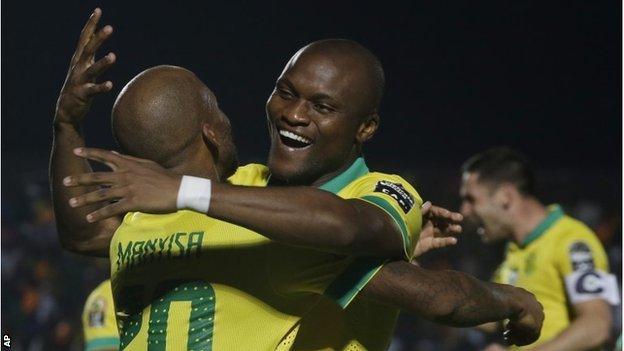 Senegal took top spot in Africa Cup of Nations Group C after coming from behind to hold South Africa.

After a first half short on drama, it took only 62 seconds of the second period for Oupa Manyisa to open the scoring from eight yards out.

Senegal pushed for a leveller, with Sadio Mane having a goal disallowed for offside before Kara Mbodji headed home.

The Lions of Teranga are not through yet, while South Africa - bottom on one point - could still progress.

Ghana beat Algeria in the earlier game - meaning both those sides are now on three points.

"So Senegal couldn't conjure up another last-minute winner. Instead they're forced to take a point - and Group C is fulfilling its 'group of death' reputation. Senegal lead the way on four points - their final game is against Algeria, who are there with Ghana on three. And South Africa still have hope. Beat Ghana and hope Senegal beat Algeria and Bafana Bafana can still sneak through. Proper entertainment in our second game - and this group is really entertaining too."

Senegal would be through with a draw in Tuesday's group closer with Algeria, while even a win for South Africa against Ghana might not be enough.

Bafana Bafana will rue a second consecutive game in which they have thrown away a lead, having lost 3-1 to Algeria in their opening game.

They had most of the first-half chances, although Senegal had the best opportunity in injury-time when Mame Diouf put a free header wide from close range.

The second half was a more entertaining affair, almost instantly. Just moments after the break, Manyisa guided Anele Ngcongca's cross home from inside the box.

But Senegal pushed for a leveller and Mane thought he had equalised when he stabbed the ball into the empty net after a Jackson Mabokgwane fumble but it was ruled out for offside.

But his side were back in the game - and in control of the group - when Papa Diop's free-kick from deep was met by Mbodji's powerful header after Mabokgwane came off his line.

From there, Senegal had arguably the best chances to win it, as Moussa Sow snatched at the ball from close range, Diouf headed another shot wide and Dame N'Doye forced a good save with a venomous effort.

Thabo Matlaba had a chance to win the game for South Africa in the final 10 minutes after a good team move but his shot was blocked and their fate now depends on other teams.

"Well done to the boys. We have created more chances than our opposition in both games. In the first game we lost in the dying minutes. Today we scored and couldn't consolidate - we gave it away.

"I think our biggest problems are regaining possession when we've lost the ball - we find ourselves wanting - and not scoring with the chances we've created. We should be top and the top scorers. We'll work on that. I'm happy and proud of the team."

"It was hard because of the humidity. We held out well.

"We could even have won the match, but South Africa could also have won it. The important thing is, we didn't lose and we can prepare to face Algeria.

"We will give everything to get out of the group. We wanted to win today, that would have made things easier, but now it's the last match that will count."