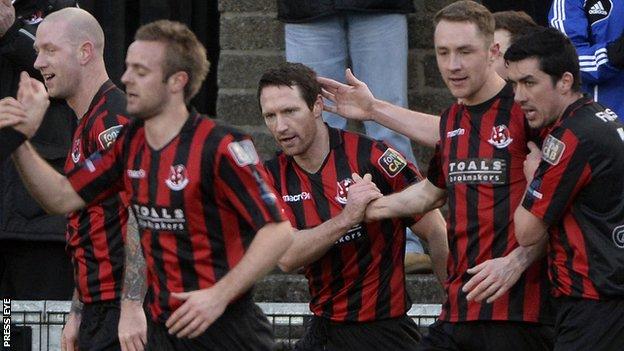 Crusaders manager Stephen Baxter takes his team to Glentoran on Saturday convinced they have what it takes to deliver the Irish Premiership crown.

The Seaview side are one point clear of Linfield at the top of the table after a run of five consecutive wins.

"We feel we can win the title, but Portadown, Linfield and Cliftonville will say the same," said Baxter.

"It is a great competitive league this year and it is important that we remain focused."

Baxter has brought in Derry City midfielder Barry Molloy and Institute striker Stephen O'Flynn in recent weeks and believes they will bolster the Crues squad for the title run-in.

"We will lose players to injuries and suspensions so it is important to have strength in depth.

"We needed bodies capable of playing at this level.

"Barry Molloy has class and big O'Flynn will score goals for us."

Crusaders will do well to maintain their winning run at the Oval as they come up against a Glens side looking to break into the top four.

Just four weeks ago, Eddie Patterson's were nine points behind the team in fourth - now that gap is down to two, thanks to a run of five Premiership wins from six games.

Champions Cliftonville have seen their hopes of a third successive title fade after taking just two points from a possible 12.

But Tommy Breslin's men will be expected to pick up their first Premiership win in over a month when they host bottom club Warrenpoint Town.

Third-placed Portadown have been inconsistent recently and badly need to secure three points when they host eighth-placed Ballymena United at Shamrock Park.