Nottingham Forest boss Stuart Pearce is "not a great coach, not a great tactician and not a great motivator", says former England defender Danny Mills.

Forest have won just twice in 20 games, slipping to 13th in the table ahead of Saturday's clash with rivals Derby.

Mills, who worked under Pearce at Manchester City, told BBC Radio 5 live: "Pearce always starts well but goes off the boil. He is very predictable.

"After 10 games people work him out."

Pearce, 52, took charge of Forest in July and saw his side lead the Championship table after seven games. But poor form since has seen the club lose in the FA Cup to Rochdale and fall 10 points away from the play-off places. 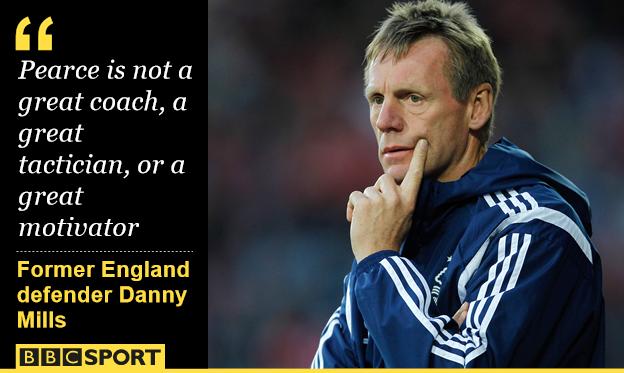 Pearce, capped 78 times by England, admits that the team's slump represents the toughest time in his coaching career but says "I never worry about my future because I have no ego."

Mills said he expected to see a bad run of results as Pearce won 10 of his first 20 league matches as Manchester City manager in 2005, before winning just 18 of the next 65.

"I'm not surprised it has happened for him," said Mills.

"Stuart Pearce came into Manchester City and had a fantastic 'Honeymoon Period' and then went wrong - and did the same with the England Under-21s.

"He comes in, everyone says 'wow, it's Stuart Pearce, legend! Psycho' and all of that and he has that instant respect.

"He gets teams going but after a while, players aren't stupid, they're not naive and they start to suss him out. He doesn't have the depth of football ability to back it up.