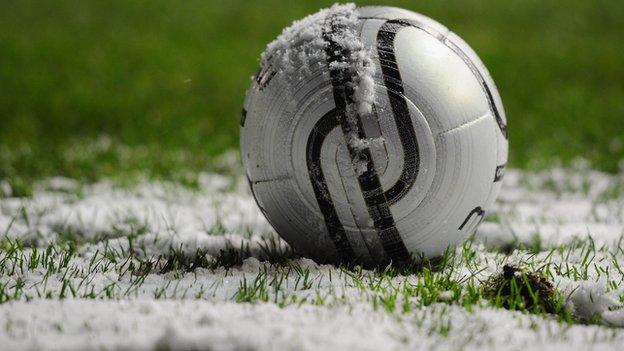 Dundee United's Scottish Premiership match against Inverness has followed games at Livingston and Albion Rovers by being called off.

Two Saturday fixtures - at Motherwell and Elgin - were already postponed on Friday, while Rangers versus Hearts was abandoned after 25 minutes on Friday.

The game at Tannadice was called off after a second inspection as parts of the surface were frozen.

Disruption to Scottish Professional Football League matches came amid warnings of hazardous conditions around the country because of snow and ice.

Heavy snowfalls and ice caused disruption on Friday evening, with central and south western areas of Scotland the worst affected.

Police Scotland warned of "hazardous" conditions across Strathclyde and Dumfries and Galloway, while snow was causing delays on some parts of the M8 and M74, with other smaller road closures.

Dundee United have offered a £5 entry to all fans to the rearranged fixture, which has yet to have a new date announced.

And general manager David Southern revealed that the club's undersoil heating had just not been able to cope with the weather conditions.

"It did go on on Thursday morning and it's has been on since then," he told BBC Scotland.

"It has been on constantly and, when we came into the stadium this morning about seven o'clock, it was clear that, while the majority of the pitch was playable, there was a crust on top of the turf.

"The issue was around the areas that have been badly rutted, particularly the goalmouths, where there is no turf covering - it's simply earth."

Southern stressed that it cost the club money to have a game postponed.

"We had the inspection as early as we could this morning," he said.

"We wanted to strike the balance between making sure we did everything we could to get the game on and also allowing for the fact there are supporters who travel from far and wide.

"So we had a second inspection at 11 o'clock and the goalmouths were the issue for us."

Elgin City P-P Clyde - Postponed due to a waterlogged pitch