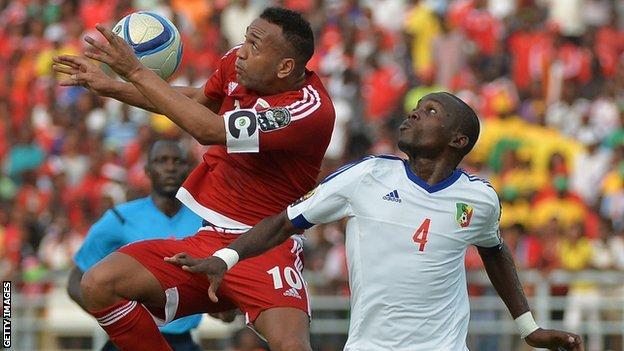 Equatorial Guinea coach Esteban Becker believes his side did not have the fitness needed to hang on to victory over Congo on Saturday.

The Africa Cup of Nations hosts drew 1-1 after conceding in the 87th minute of the opening game of the tournament.

Becker, officially appointed only 11 days before the game, said: "We didn't have time to work on the physical side.

"We did let it slip at the end, we were meant to win. But we left a great impression out there."

Equatorial skipper Emilio Nsue put his side ahead early in the first half but Congo fought back strongly after the interval and their pressure paid off when Thievy Bifouma struck with three minutes remaining.

Becker added: "I had 15 days to prepare with them and there are also a lot of new, young players. It was difficult to plan to try and peak all the preparations."

However, the Argentine believes the team "still has a chance to get some good results."

Congo's next Group A game is on Wednesday against Burkina Faso, who were surprisingly beaten 2-0 by Gabon in their opener on Saturday.