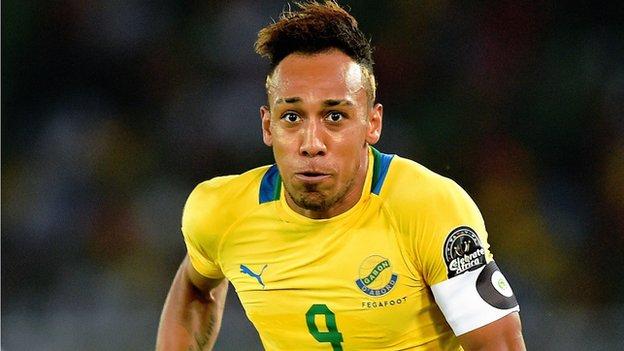 Gabon skipper Pierre-Emerick Aubameyang has declared his desire to become the next superstar of African football.

After scoring in the 2-0 win over Burkina Faso in the Africa Cup of Nations on Saturday, he said: "I try to do the maximum to be one of the greats like Didier Drogba and Samuel Eto'o.

"I don't feel any pressure to be like them, but there is maybe a level of expectation around me.

The 25-year-old, who plays his club football for German side Borussia Dortmund, has made the perfect start to Africa's biggest football tournament.

He set his side on the path to victory when he scored after 18 minutes and he was also involved in the second goal, which was netted by Malick Evouna in the second half.

It is a stark contrast from Aubameyang's last contribution to the 2012 tournament, which was co-hosted by Gabon and Equatorial Guinea, when he missed the decisive penalty in a quarter-final shoot-out defeat to Mali.

He said: "That penalty I missed against Mali in the quarter-final, even if I missed it, remains a good memory for me because it made me grow up.

"But for this competition, we are starting from scratch. It's a new tournament and it has begun well for me with a goal.

"I hope we reach the quarter-finals again this time, and if we get another penalty then I will score it."

Having beaten the team who coach Jorge Costa described as the strongest in Group A, Gabon could qualify for the last eight with victory over Congo on Wednesday, providing the result in the other game, between Equatorial Guinea and Burkina Faso, goes their way.