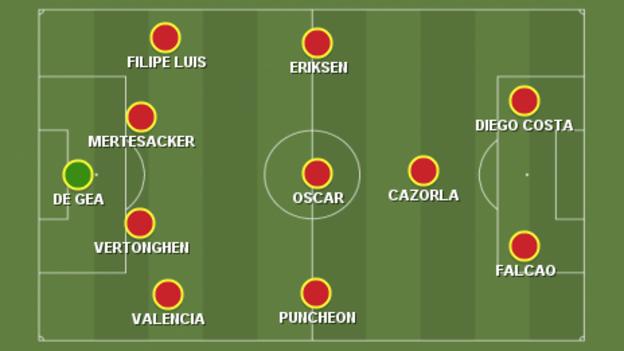 Chelsea were the weekend's big winners as they comfortably dispatched Swansea 5-0, then saw title rivals Manchester City slip to defeat against Arsenal.

Southampton continued their excellent run away from home as they beat Newcastle, while Manchester United kept up the pressure on Ronald Koeman's side with a win at QPR.

Meanwhile, Burnley let slip a two-goal lead for the second straight match as Alan Pardew's Crystal Palace came back to win 3-2, and there was little to cheer for the other sides at the bottom of the table as Leicester suffered a narrow defeat to Stoke and Hull were well beaten by West Ham.

He produced two magnificent saves from Charlie Austin. De Gea's performance against QPR not only added to Harry Redknapp's woes but also elicited rare public commendation from his manager Louis van Gaal. The keeper was outstanding, said the Dutchman, and has been for most of the season. High praise indeed from a man who normally doesn't lavish his players with compliments.

What a signing Antonio Valencia has proved to be for Manchester United. The club have a habit of finding extraordinary players who provide sterling service. He reminds me of players like Brian McClair and Ole Gunnar Solskjaer, who didn't seem to mind where they played as long they were on the pitch. Valencia was outstanding against QPR at full back and provided the killer pass for Marouane Fellaini to score and leave Rangers fighting for their Premier League survival.

Centre backs seldom score goals, but when they do they tend to cherish them. So imagine scoring a perfectly good goal only to see it ruled offside. Poor Jan Vertonghen must have been furious when he saw the replay of the incident that clearly showed him collecting the ball in his own half before rolling it into an empty net. The referee's assistant clearly became confused as he didn't see more than one man between the man and the goal. Well that should clear that up then.

It is no secret that I have an enormous regard for this player. He hasn't had the best season so far, but he was back to his composed best against Manchester City. It was always going to take a special defensive display by the Gunners to get a victory at the Etihad, but that's what Arsenal produced and their skipper was a rock.

It was an emphatic display in every department from Chelsea. It's not been an easy transition for Filipe Luis since his arrival from Atletico Madrid but he is starting to look comfortable in the left-back spot. At one point in the second half he was in the box desperately trying to get amongst the goals, which is an indication of his growing confidence. He said in his post-match interview on Match of the Day that the best way to respect your opponent is to keep running and keep scoring goals. Well, they've definitely Garry Monk's respect after that display.

When this lad is on top of his game Crystal Palace invariably score goals. Puncheon loves to get forward and get amongst the action if he can. It was his shot that produced the equaliser for the Eagles, and his superb pass for Dwight Gayle to get the winner. He did it for Tony Pulis and now he's doing it for Alan Pardew.

I picked this player in my Team of the Week last week and I said in my notes that he was playing some lovely football. Well I take that back and I now say he's playing the best football I've seen him play for Chelsea. He left no hiding place in the Liberty Stadium for the Swans, who had their wings well and truly clipped by some clinical finishing by the Brazilian international. I can't remember when I've seen him looking so impressive.

This player clearly has a lot of talent. With Gareth Bale and Luka Modric having left Spurs, the real flair in the club is left to the likes of Eriksen. Tottenham are used to having the occasional footballer who can produce a defence-splitting pass or create something out of nothing. Eriksen is in that class and I'd like to see more of it please.

What a performance by the Spaniard. You don't normally expect your best attacker to also be your best defender. His performance against Manchester City was immense and I never thought Cazorla was capable of a such display. He made timely interceptions, never gave the ball away and was the coolest man on the pitch when it mattered to put Arsenal 1-0 up with a penalty. If Arsenal can replicate this form away from home then they - not City - will be the new threat to Chelsea.

I don't know what Louis van Gaal said to Falcao last week, having left the Colombian out of the game against Southampton, but based on what I saw against QPR at Loftus Road Manchester United must keep this striker at the club. His work rate was phenomenal and it was only Robert Green who denied the player a hat-trick.

This player looks like a gun for hire in a spaghetti western movie who has walked into town and taken precisely what he wanted. There was nothing fictional about the way Diego Costa hit Swansea with two deadly strikes that left the Swans dazed and bewildered. The Spaniard made the Swans pay for some woeful defensive errors.