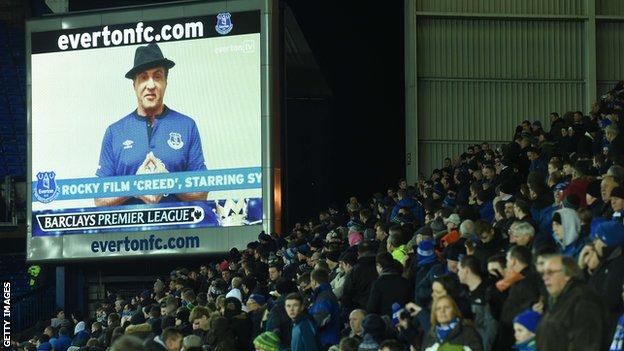 Not even a half-time message from Sylvester Stallone could inspire Everton to a first victory in more than a month against West Brom on Monday.

The Hollywood actor appeared on the big screens at Goodison Park encouraging supporters to cheer for the recording of scenes in an upcoming film.

Toffees fan Stallone is set to reprise his role as boxer Rocky in 'Creed'.

However, a Kevin Mirallas missed penalty left the home fans with little to cheer about as the game ended 0-0.

Champion boxer and Everton supporter Tony Bellew stars in 'Creed' and he arranged for the filming to take place at Goodison Park.

"I play the pound-for-pound champion of the world and I end up facing Adonis Creed," said Bellew.

"Rocky Balboa gets involved when he agrees to train Adonis. But if Adonis wants to be the champion, he has to go through me."