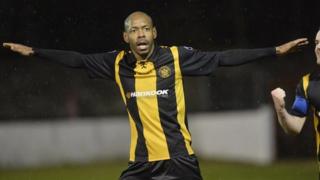 The match had been rearranged because the initial game between the sides on 10 January was abandoned when Larne player Scott Irvine sustained a serious head injury.

Miguel Chines gave Carrick the lead with a 38th-minute penalty, James McCabe grabbed an equaliser for Larne in the second half, but Conor McCloskey headed home the decisive goal with 15 minutes remaining.