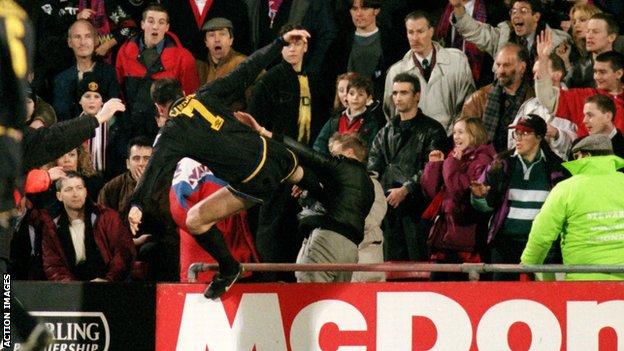 25 January 1995 saw one of most infamous incidents in football when Manchester United's Eric Cantona launched himself kung-fu style into a Crystal Palace supporter. 20 years on BBC Sport looks at the steps which made Cantona an icon.

Eric was born in the Caillols district of Marseille. The family house was originally a cave in the foothills of the Massif de la Sainte Baume. The cave was briefly used as a Nazi lookout post during the Second World War before, in 1955, Cantona's grandfather arrived from the Italian island of Sardinia and made the cave home. Over the years, a house was built above and around it, with Eric living the life of a country boy, walking the mountains and shooting lark and woodcock.

2. In and out of love with football

In 1989, Cantona threw his Marseille shirt to the ground during a charity match. He was chastised by chairman Bernard Tapie and eventually loaned to Montpellier. It was there, during a post-match row, that Cantona threw his boots in the face of a team-mate who had criticised him. There was more to come.

On 15 May, 1990, having rejoined Marseille, Cantona reacted to a refereeing decision by throwing the ball straight at the official. He was suspended for a month, with his previous poor behaviour taken into account. Cantona responded by telling each member of the disciplinary committee that they were idiots, to their faces.

His sentence was doubled on the spot. Cantona walked away from football and spent weeks walking the beaches of the Camargue. He spent his time reading, painting and listening, by his own account, to the music of Leo Ferre and William Sheller.

With Cantona a lost soul, France international and now Uefa president Michel Platini stepped in. He suggested a new start in England. Gerard Houllier acted as an intermediary and worked with football agent Dennis Roach to find an English club.

In January 1992, Cantona was invited to England by Trevor Francis, then Sheffield Wednesday manager. Next stop was the indoor training pitch at the Sheffield Arena. "I was there for a week and I thought I was there to sign," recalled Cantona. "I trained and played in a friendly game. We won 4-3. I scored three goals."

But Francis needed to see more. "Maybe they were suspicious, but I was a France international and Sheffield Wednesday wanted more time to decide about me," said Cantona. "That was not a very good way to go about things." Francis tells a different story, but the end result was the same: Cantona joined Leeds United.

During his time at Leeds, Cantona, his then wife Isabelle and five-year-old son, Raphael, lived in a rented semi in Roundhay Park. "The house and the district were definitely not plush or exclusive," said Cantona. "Many of our neighbours are Pakistanis or West Indians, as well as English. They are straightforward, friendly and generous. I prefer, by far, our little English house with its wild piece of garden to those vast Victorian houses among which I'm sure I would soon get fed up."

Roy Keane tells a story of their time together at Manchester United. Each season the players would get around £800 for their work on club videos and with the club magazine. Every player, save David Beckham and the Neville brothers, who could not afford to risk £800 at the time, put their cheques in a hat. The last name out would take home the money. On this occasion, the last name out was Cantona's.

According to Keane, Cantona won around £16,000, but he didn't keep it. He cashed the cheques but split the money, giving one half to Paul Scholes and the other to Nicky Butt, because they had the courage to take the risk when they really couldn't afford it.

United were in something of a mess when Cantona arrived at Old Trafford in late November 1992. Sir Alex Ferguson's side were eighth in the table and Dion Dublin, their summer signing, had broken his leg. Ferguson tried to sign Alan Shearer, but he said no. So Ferguson met his chairman, Martin Edwards, to discuss transfer targets.

As Ferguson talked about missing out on Cantona when he joined Leeds, the phone rang. It was Bill Fotherby, the Leeds managing director, asking about the possibility of signing Denis Irwin. United said no. Edwards asked if Leeds might consider selling their striker Lee Chapman. But Ferguson scribbled another name on a piece of paper. It was Cantona's.

Edwards asked the question and within an hour the deal was on and a fee of between £1m and £1.2m was agreed. Cantona's arrival triggered an incredible period of success. United won four titles in five years and would surely have won a fifth but for that fateful night at Selhurst Park. But, more than that, Cantona unlocked United's attacking potential, the "can-opener" was how Ferguson described him.

6. Bowing out on top

It was on 18 May, 1997, that Cantona took the decision to call time on his career. The announcement came a week to the day after his fifth championship in six seasons in England. It was a career of astonishing brilliance and times of darkness, memorable moments and images of infamy. His achievements as a club footballer were, however, in stark contrast to what he achieved, or didn't, with France.

He scored 20 international goals but was never able to represent his country in the World Cup. His retirement in 1997 meant he missed out on the 1998 World Cup, but in truth he was unlikely to have been selected, having missed out on selection for Euro 96. Cantona was, however, chosen by Pele in his list of Fifa 100 Greatest Living Footballers.

Beach soccer briefly captured Cantona's imagination. He was introduced to the game, originally as a player, by his brother, Joel, just months after his retirement from professional football. He subsequently managed his country to victory in the 2005 Beach Soccer World Cup - only the second time that a team other than Brazil had won the trophy.

Cantona saw beach soccer as a way of helping under-achieving players realise their potential. "They're all top-level athletes and often they come out of academies regretting some of the wrong turns they took," he said. "Dedicating themselves to beach soccer becomes a way of making up for their mistakes."

Even before his retirement, Cantona had an eye on a career as an actor. "I feel a lot happier in the world of imagination," he said. "Maybe there is an element of fleeing reality to it." Cantona played a French ambassador in the 1998 film 'Elizabeth', starring Cate Blanchett, and then himself in the Ken Loach film 'Looking for Eric' in 2009.

"It's a discipline," Cantona said of acting. "For me, football, cinema, theatre or photography are all ways of expressing ourselves. Of course, if you want to be a photographer you need to learn the techniques. You must learn how to play the sport, but I don't think the technique is the most important thing. Sometimes it's nice when it's not so perfect. It's like beauty. If someone is too perfect, they won't look good."

Cantona is a prolific reader and always has been. His three favourite books are 'The Picture Of Dorian Gray' by Oscar Wilde, a collection by Antonin Artaud and 'Narcissus & Goldmund' by Hermann Hesse.

"They are books about our desires and the small voice inside us that tells us not to follow them," said Cantona. "It's about that rivalry between the two people inside each of us. All my life is like this! But I really enjoy heavy classical books. Dorian Gray is also funny."

The actor is also a campaigner. He has been critical of banks, critical of Fifa and critical of governments and countries with poor human rights records. He was even mooted as a French presidential candidate in 2012 as he sought to shine a light on the plight of the country's homeless. More recently, he has been working with Amnesty International.

Prior to last year's World Cup, he suggested that the money the Brazilian government spent on stadiums and lost in corruption should have been spent on schooling and medicine. And the decision by Fifa to award the 2022 World Cup to Qatar, where the abuse of migrant workers remains a source of concern, sparked this response: "In giving the World Cup to Qatar, they show the world that they don't really care about the sport."

Cantona was never short of a memorable quote. The most famous was repeated by a leading Hollywood star. Just like Cantona before him, Shia LaBeouf walked out of a news conference at the Berlin Film Festival after the then 27-year-old was asked about his decision to star in a movie with so many sex scenes. He replied: "When the seagulls follow the trawler, it's because they think sardines will be thrown into the sea."