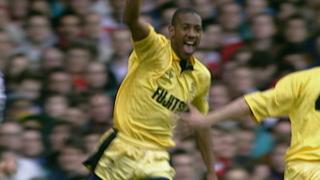 Former Cambridge United and England forward Dion Dublin returns to the Abbey Stadium to visit his former team before their FA Cup fourth round tie against Manchester United.

Dublin, who left the U's to join Manchester United in 1992, reminisces about some of the most spectacular goals he scored for the club and representing them in cup competitions.

League Two Cambridge beat Luton 2-1 in the third round thanks to goals from Robbie Simpson and Ryan Donaldson to set up their dream tie against the 11-time FA Cup champions Man United.