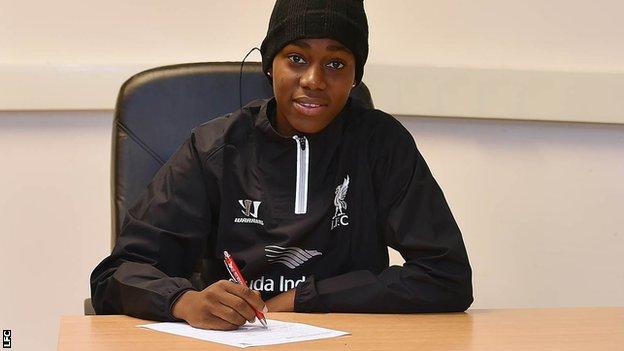 New Liverpool signing Asisat Oshoala is "one of the best young players in the world", says Reds boss Matt Beard.

Oshoala won both the Golden Boot and Golden Ball - as Player of the Tournament - at last year's Under-20 World Cup Finals, and becomes the first player from Africa to compete in the Women's Super League.

"We beat a number of top American and European clubs to Asisat's signature," said Beard as he welcomed the 20-year-old striker. "Asisat is one of the best young players in the world."

In addition to her star performances in the U20 World Cup, Oshoala also collected the Golden Ball award as the senior Nigeria team qualified for the 2015 World Cup by winning the African Women's Championship.

Beard added: "She's not the finished article yet but she's got pace, power and she certainly knows where the goal is.

"I watched her at the Under-20 World Cup, where she was sensational, and we had early dialogue with her about coming to Liverpool.

"There's been plenty of other interest in her in the last few months, but she chose to join us and I'm absolutely delighted."

"Liverpool Ladies are a massive club with some fantastic players who I believe can help me to develop my game to the next level.

"It was also a big incentive to be able to play in the Women's Champions League, which is a huge competition that I'm confident we can do well in."

Oshoala is Beard's fourth signing of the window after he also added Satara Murray, Ingrid Ryland and Line Krogedal Smorsgard to his squad.

But the manager reckoned: "With the addition of these four new players I believe this is the best squad I've ever put together.

"We've won the league for the last two years and we'll aim to do it again, although next season is going to be the most competitive ever.

"Clubs like Manchester City and Notts County have recruited really well and I can see four or five teams battling it out for the title.

"We can be one of them, especially if we can avoid the dreadful injury problems we had early on last season."