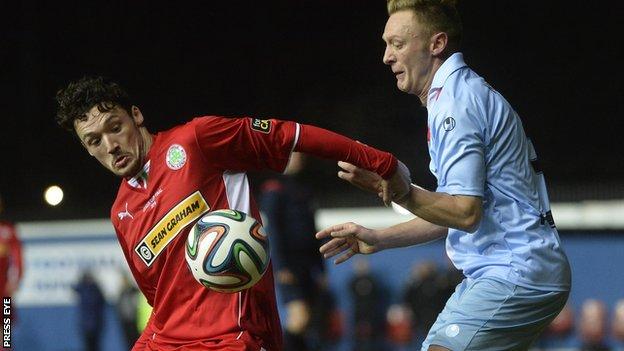 Joe Gormley pounced on mistake by United keeper Dwayne Nelson to slot in after 55 seconds and the striker fired home to make it 2-2 at Windsor Park.

Ballymena substitute David Cushley scrambled in early in the second half before equalising with a powerful shot.

Martin Donnelly rifled in the winner 10 minutes from time and Nelson denied David McDaid in extra-time.

Cliftonville were aiming to add to their Co Antrim Shield success earlier this month and they made the perfect start in south Belfast.

Jay Donnelly flicked on from a long ball and Nelson failed to connect with his attempted clearance, letting in Gormley to simply roll the ball into an empty net for his 30th goal of the campaign.

The shell-shocked Sky Blues failed to recover from the early setback and Cliftonville went on to control a scrappy first half.

Jay Donnelly dragged a shot wide while Jaimie McGovern was also off-target from a back-post header to maintain his unwanted record of never scoring in senior football.

Matthew Tipton glanced a header wide from a rare Ballymena opportunity before Gormley doubled his tally and Cliftonville's lead after 37 minutes.

United failed to clear from a cross and the prolific striker guided the ball beyond Nelson and into the bottom corner from close range.

Cushley was brought on at the start of the second half and Ballymena were first to threaten with Martin Donnelly clearing Tony Kane's inswinging corner off the line.

The Reds should have made it three but Jay Donnelly underhit a simple pass to Gormley, which would have almost certainly resulted in a goal, and a thankful Nelson collected.

It was a costly miss as Cushley blasted in seconds later at the second attempt after keeper Peter Cherrie failed to hold Kane's corner on 52 minutes.

In contrast Cushley was clinical in front of goal, and he levelled with a blistering 16-yard strike into the Reds net from McGovern's poor clearance in the 58th minute.

Gormley was forced off with a leg injury but Martin Donnelly showed that the Reds still carried an attacking threat when he scored the winner on 80 minutes.

Kane sent his headed clearance straight into the path of the winger, who controlled before arrowing his shot across Nelson and into the net.

Substitute David McDaid wasted two chances to ease Cliftonville nerves in injury-time with Nelson denying the striker both times after he was through on goal.

"We let them back into it but we showed tremendous character to come back and the end and nick the goal.

"Credit to Ballymena - it just wasn't their night but they contributed to a wonderful spectacle."

"I told the players at half-time to keep believing and the introduction of David Cushley added more fire-power.

"We made a couple of mistakes, one at the start of the match and one at the end, and they cost us the game."