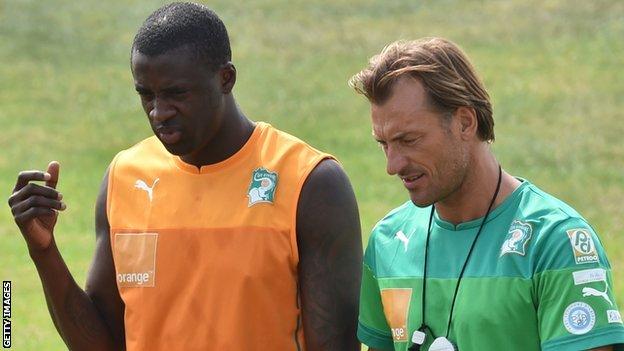 The country had only two months to prepare for the tournament after replacing Morocco, prompting fears the event could be a disaster.

But Renard said: "We are in magnificent surroundings. The stadium here in Malabo is lovely and the atmosphere was very, very good in the first match.

"I hope that it continues and for the moment I think it's a great success."

While some countries at the finals have complained of poor facilities and have been frustrated by transport problems, Ivory Coast appear to have no such worries.

Renard added: "Personally, we have no problem because I think we are in one of the best hotels here in Malabo, so we are in magnificent surroundings."

Meanwhile, the Frenchman is less satisfied with his captain Yaya Toure, who was well below his best in Tuesday's 1-1 draw with Guinea.

"I think Yaya was a bit tired at the end of the game so it was better for him to come off, but he is a big competitor so he'll be ready for the second game," said Renard ahead of Saturday's match against Mali.

"He has a big responsibility now, with the captain's armband. I expect a better second game from him than the first one.

"If he is not able to improve his level it will be difficult for the team."