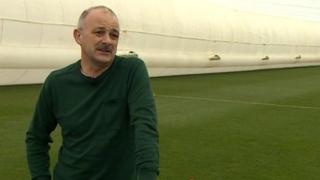 Groundsman who spent £30k on Cambridge

Cambridge United groundsman Ian Darler believes he has spent about £30,000 of his own money on equipment over his 30 years looking after the Abbey Stadium pitch.

Friday night will be one of the most enjoyable, but challenging, days of his career, as the U's host Manchester United in the FA Cup fourth round.

The club, currently financial stable, has experienced difficult times, and Darler has often dipped into his own pocket to buy equipment, including lawnmowers.

BBC Look East's James Burridge takes a look at Darler's preparations, including the use of the Football Association's protective air bubble, that will keep away the frost.