Billy Sharp's late header secured a derby victory over Huddersfield Town for Leeds and eased the relegation concerns of Neal Redfearn's side.

Sam Byram had put the visitors in front with a one-on-one finish, before Harry Bunn headed in a corner to level.

United had not won in seven league games until last week's victory against leaders Bournemouth, and now have back-to-back victories for the first time since September, a week after owner Massimo Cellino stepped down from his involvement with the club.

They looked in high spirits early on, against a Huddersfield side that won three of their last four, as Byram latched on to Luke Murphy's pass before clipping over keeper Joe Murphy keeper with just seven minutes gone. 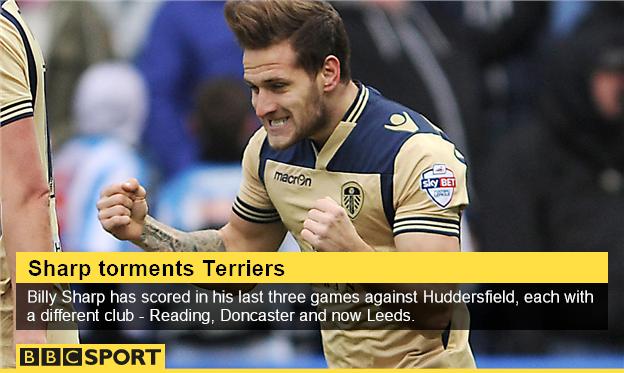 Things seemed to get immediately worse for the hosts, with top-scorer Nahki Wells having to go off injured, but it paved the way for scorer Bunn to step off the bench.

And after James Vaughan's shot was deflected wide, Jacob Butterfield's subsequent corner drifted all the way to the back post where the substitute was able to nod in his seventh of the season.

Vaughan, wearing a facemask to protect a fractured cheekbone, had a header saved by Marco Silvestri and Sean Scannell fired across goal before the break.

But the game became flat in the second half, living up to its billing as a gritty derby, with plenty of contested tackles but few clear-cut chances.

Bunn almost snatched a winner for the Terriers but his header was cleared off the line by Steve Morison before Sharp produced the late drama, earning a booking for his exuberant celebration.

The game finished on an even more sombre note for mid-table Town, as defender Tommy Smith was taken off on a stretcher with a head or neck injury, and was later taken to hospital by helicopter.

"It was a very serious incident but he is in good hands. His welfare is all important now.

"I believe he was in and out of consciousness for 10 minutes and this was a major head or neck trauma.

"I am a little bit shocked after that, but I have spoken to his family and hopefully he will be okay."

"It was a great win because it sends out a message. It's a culmination of the four matches and is similar to when I was caretaker.

"We have two wins and two draws and we are going in the right direction."