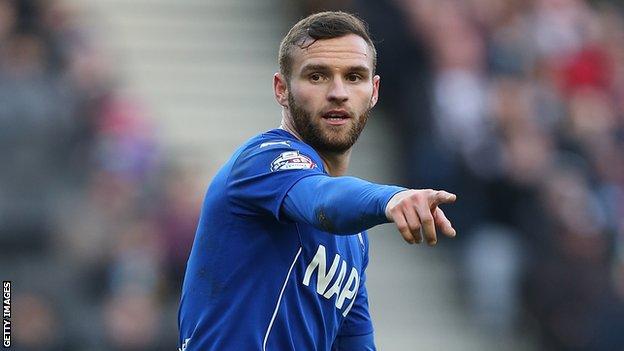 Jimmy Ryan scored a late equaliser as Chesterfield came from 2-0 down to draw with play-off rivals Doncaster.

James Coppinger put Doncaster ahead with a shot high into the corner before an unmarked Andy Butler headed inside Tommy Lee's post.

But Eoin Doyle got Chesterfield back into the game before the break when he pounced on a pass from Sam Morsy.

Ryan then steered the ball past Stephen Bywater in the 87th minute to complete the spirited fight-back.

"We got caught cold for the first nine minutes, we knew Doncaster had individual players that can hurt you at any time.

"But I thought with the honesty and endeavour from the players, we thoroughly deserved the point in the end.

"I thought the tempo of the game was good and both teams were trying to win the game which was good for the fans."

"We're disappointed. You've got to give Chesterfield credit for getting back into the game, they're a very good team.

"But we started really well and went 2-0 up. But then the last 15 minutes we dropped off.

"Second half, no disrespect to Chesterfield, we feel we should have been three or four up."