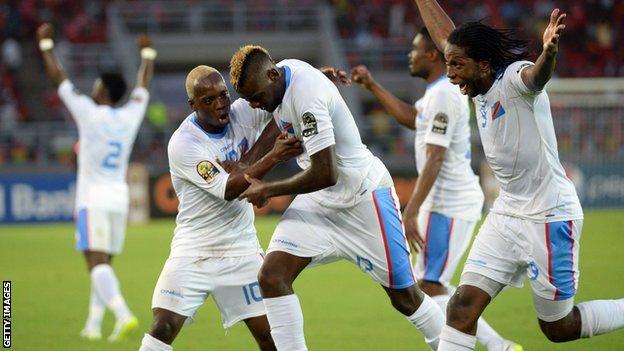 DR Congo fought back from two goals down to beat neighbours Congo and reach the Africa Cup of Nations semi-finals.

Ferebory Dore volleyed Congo in front and Thievy Bifouma drove in from a rebound to make it 2-0 either side of DR Congo efforts that hit the bar.

In a 16-minute spell DR Congo's Dieumerci Mbokani slotted in to give them hope, Jeremy Bokila equalised and Joel Kimuaki headed a third.

Mbokani rounded off the win, stroking home after a counter-attack.

It capped a remarkable fightback from DR Congo who looked to be heading out of the competition when they were two goals down just after the hour mark.

A tepid first half, in which Congo were unable to assert themselves at all, ended goalless and there was no sign of what was to follow.

DR Congo had a strong shout for a penalty immediately after the break and then Bokila smashed a shot against the bar from 12 yards.

Only four minutes later Congo struck the first blow when Dore ghosted in at the far post to volley in from a long, diagonal free-kick into the box.

DR Congo almost equalised shortly after when Cedric Makiadi's free-kick crashed against the bar. But instead they conceded again after Jean Kasusula passed the ball out of defence straight to Dore whose shot was blocked by Kidiaba into the path of Bifouma and his effort beat the defenders on the line.

However, DR Congo refused to cave in and three minutes later they finally got the goal they had been threatening, Yannick Bolasie beat two men for pace and cut the ball back from the byeline for an unmarked Mbokani to slot home.

"An extraordinary display of attacking prowess by Dieumerci Mbokani and Neeskens Kebano. The defences left massive questions to be answered.

"DR Congo gave away the two goals they conceded but they really got it together.

"In the end they definitely deserved to go through."

A minute later Bokila somehow missed the target after a knockdown from the excellent Mbokani, and then Dore was inches away from making it 3-1 to Congo as the game swung from end to end.

Back came DR Congo and Bokila finally made up for his earlier wastefulness when he fired a left-foot shot into the top corner and levelled the score.

With DR Congo now in the ascendancy they used their momentum to press Congo back and won a free-kick on the left flank. Cedric Mabwati swung in the set-piece and substitute Kimuaki glanced a header into the corner to put his side in front.

A magnificent turnaround was capped when substitute Neeskens Kebano found Mbokani, who followed up after his initial effort was saved to slot home his second and his side's fourth.