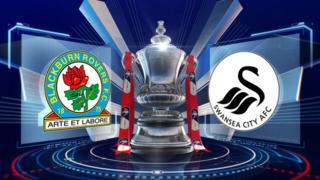 Blackburn Rovers scored two late goals to knock Premier League Swansea out of the FA Cup at the fourth round stage.

The visitors had Kyle Bartley sent-off for fouling Josh King after just seven minutes but took the lead when Gylfi Sigurdsson powered in a 25-yard strike.

Rovers equalised quickly when Chris Taylor sent in a shot on the turn.

Rudy Gestede bundled the ball in and Craig Conway added a Blackburn third before Sigurdsson was the second Swansea player to be red carded.

Watch all the FA Cup fourth round highlights here