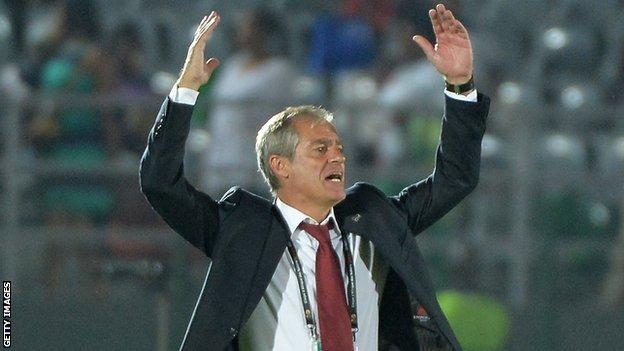 Cape Verde coach Rui Aguas says reaching the quarter-finals is the "minimum objective" for his side.

A win against Zambia on Monday will assure of them of their place - matching their achievement from the 2013 tournament.

But Aguas wants to go further, saying: "We will try everything, we have everything in our own hands.

"We want to do better than what we did last time. The minimum objective is to get to the next phase."

However, Aguas is aware that his side could be scuppered by their inability to score. They have managed only one goal in their two games, a penalty in their opening 1-1 draw with Tunisia. In their other match they were held 0-0 by Dr Congo.

"Finishing has been a problem for us but we have played two very good games so far. I think we have discovered that we can do better than we have and reach the next round," Aguas said.

"It has been frustrating and disappointing not to have won and missing chances means we have just made it more difficult for ourselves. I believe we can do better and score finally in the third game."