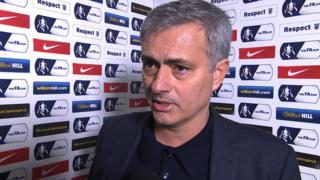 The Blues led the League One side 2-0, before the Bantams produced a stunning four-goal comeback to knock out the Premier League leaders.

Mourinho praises Bradford's attitude, and says the upset is part of "the beauty of football" but adds that his side "must feel ashamed" by the manner of their elimination.