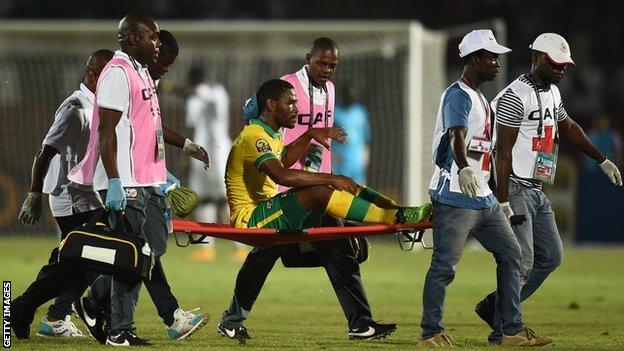 South Africa defender Thulani Hlatshwayo has been ruled out of their final Africa Cup of Nations Group C match against Ghana on Tuesday.

He has not recovered from a concussion suffered in the 1-1 draw with Senegal.

"His brain was shaken violently when he tried to head the ball but ended up with a clash of heads with an opponent," said Dr Thulani Ngwenya.

The Bafana Bafana doctor suggested the player may be fit to play in the quarter-finals, if the team qualifies.

Meanwhile coach Shakes Mashaba is hopeful that Hlatshwayo's fellow defender, Rivaldo Coetzee - who was stretchered off in their opening game 3-1 defeat by Algeria - will be available against the Black Stars.

He is set to train with the squad on Monday before a final decision is taken as to whether he has recovered sufficiently from his knee injury.

South Africa are bottom of the group and need to beat Ghana to stand any chance of making it through to the knockout stages of the tournament. They will also need Senegal to beat Algeria in the group's other game.