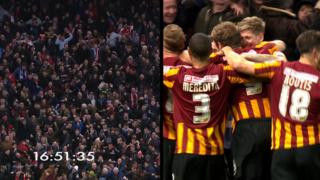 Watch the moment when both Premier League leaders Chelsea and champions Manchester City were dumped out of the FA Cup with goals scored in the same second.

Mark Yeates scored Bradford City's final goal in a remarkable 4-2 comeback victory at Stamford Bridge and in the same second Kike put Boro 2-0 up against City.

With Southampton losing to Crystal Palace, Saturday saw three of the Premier League's top four sides knocked out of the FA Cup.