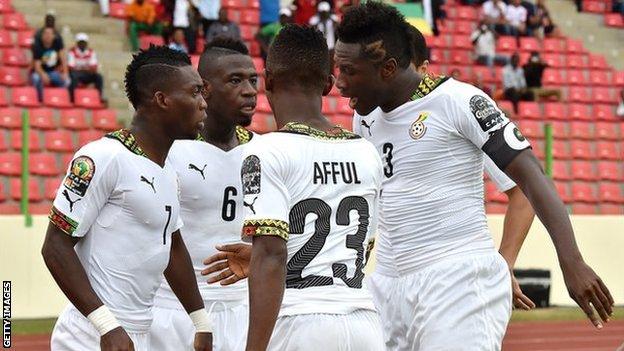 Ghana eased into their fifth consecutive Africa Cup of Nations semi-final by beating a poor Guinea.

Christian Atsu set them on their way after only four minutes, stroking in from Andre Ayew's clever backheel.

Guinea gifted Ghana a second when Baissama Sankoh horribly sliced a clearance and Kwesi Appiah ran clean though on goal to slot home.

Atsu made it 3-0 after the hour, coming in from the right touchline to strike an outrageous shot into the top corner.

The match was a stark contrast to the drama of Saturday's quarter-finals, in which DR Congo and Equatorial Guinea came from behind to win - the latter in controversial circumstances.

From the start of this game there was only going to be one winner as Ghana barely had to break sweat to defeat Guinea, who had qualified for the last eight through the drawing of lots at the expense of Mali.

The Black Stars made a fast start and they cut Guinea apart on the right flank as Appiah fed Ayew and his backheeled cross was converted by Atsu from eight yards out.

Even at that early stage, Guinea's body language and energy indicated this was a game too far for a team that had lost their past three Nations Cup quarter-finals.

Ghana, who are seeking their fifth title and first since 1982, took their time to make the superiority tell - seemingly content to play within themselves in the face of a non-existent threat from their opponents.

In fact, Guinea proved more dangerous to themselves just before half-time when centre-back Sankoh made a howler of what should have been a routine clearance, slicing the ball into the path of Crystal Palace forward Appiah, who ran on to the ball and comfortably fired past keeper Naby Yattara.

Sixteen minutes after the restart Ghana made certain of the victory in some style as Chelsea winger Atsu pulled off an audacious cross-shot from the right flank, sending the ball over Yattara and into the far top corner of the goal.

From then on it was a procession for Avram Grant's men, who appeared to be saving themselves for a meeting with tournament hosts Equatorial Guinea on Thursday.

Guinea's disappointing day was made worse in stoppage time when goalkeeper Yattara clattered Asamoah Gyan outside the box and was sent off for the reckless challenge.