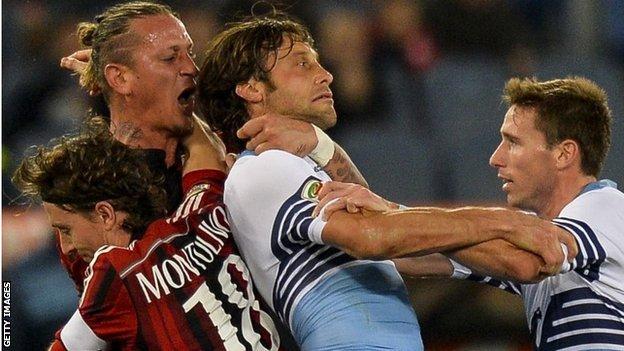 Has there been an angrier footballer anywhere in Europe this season?

AC Milan defender Philippe Mexes was sent off on Saturday during his team's 3-1 defeat at Lazio after grabbing Lazio captain Stefano Mauri by the throat.

The pair were separated but Frenchman Mexes went back for more, first trying to head-butt Mauri before grabbing him from behind.

"I have to apologise to the club, the coach and my family," Mexes said afterwards. "It was the wrong reaction and I am sorry because I left the team with 10 men and I will be suspended.

"Unfortunately I made a mistake. In my career I have had these reactions. These things should not happen out on a football pitch.

"I have children and this is not the sort of example that a father should set."