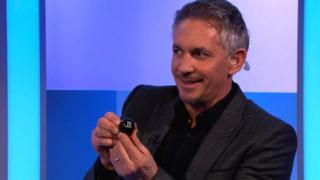 Match of the Day's Gary Lineker drops a ball during the rehearsal for the FA Cup firth-round draw on The One Show.

Mark Chapman goes on to call Lineker the "clumsiest man in the world" before the former England international threatens to do it again during the live draw.

Afterwards Lineker admits to Chapman he was feeling nervous and his hands were "sweaty".